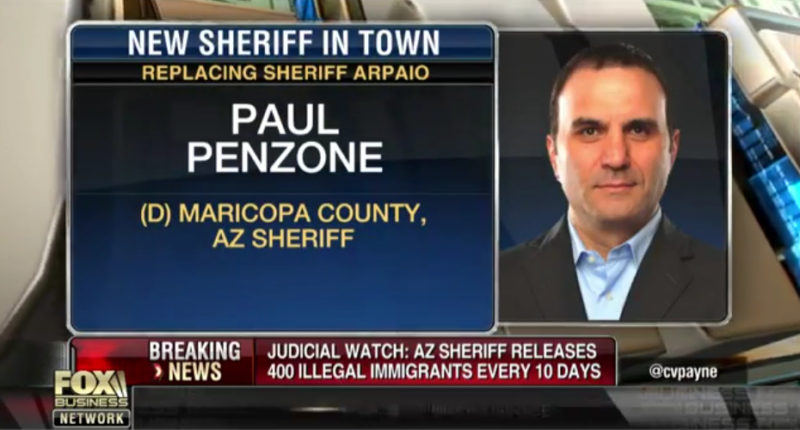 Should he be charged as an accomplice for every crime committed since their release?

An average of 400 “criminal illegal immigrants” are being released every 10 days by the newly elected sheriff in Arizona’s most populous county, federal law enforcement sources tell Judicial Watch, many of them violent offenders. It’s part of Maricopa County Sheriff Paul Penzone’s new policy to protect illegal aliens, even those who have committed serious state crimes, from deportation. Under a longtime partnership between the county and the feds, the Phoenix field office of Immigration and Customs Enforcement (ICE) was notified when “aliens unlawfully present with additional Arizona charges” were released from the Maricopa County Jail, which is one of the nation’s largest with a population of about 8,000. That ended when Penzone, who refers to illegal immigrants as “guests,” took office this year and, though he formally announced the change last week, it was put into practice much earlier.

During a recent 10-day period, more than 400 criminal illegal immigrants were released from the Maricopa County Jail, according to federal law enforcement officials directly involved in the process in Phoenix. Weekdays are the busiest, with an average of about 40 criminal illegal aliens getting released from Maricopa County Jail facilities, the sources said. On weekends the number drops to about ten each day. The illegal aliens have state criminal charges ranging from misdemeanors to felonies, driving under the influence and drug offenses. “There’s no telling how many criminals he’s (Sheriff Penzone) putting on the streets,” said a high-ranking federal law enforcement official stationed in Arizona. Judicial Watch’s calls to the Maricopa County Sheriff’s Office were not returned. More

SURPRISE! Meet The Convicted Terrorist Behind The Next Women’s March Calling For A “New Wave Of Militant Feminist Struggle"