Where’s all the media outrage? I’m disgusted at John McCain’s dishonorable & despicable behavior. A traitor to his constituents choice for President. Shame on you, John McCain.

Senile old McCain is fooled, played and used by the Russians and now he’s is busy telling the world how bad the Russians are… I wonder why? I sure wish the citizens of Arizona would immediately put him out to pasture once and for all. 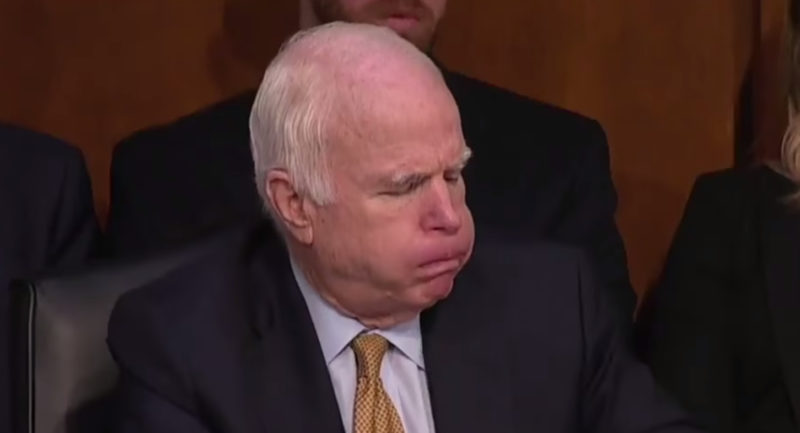 100%FedUp: Where was the media’s outrage when a sitting United States senator, John McCain went on a wild goose chase, that led him overseas, in an effort to obtain what he believed was incriminating evidence that could be used to harm President Trump?

“How serious do you think this particular shoe is?” Raju asked, referring to Donald Trump Jr.’s meeting with Kremlin-linked lawyer Natalia Veselnitskaya after being promised dirt on Clinton that was reportedly part of a Russian government effort.

“I don’t know. But it’s certainly another shoe that’s dropped that needs to be pursued and looked at,” McCain said. –TPM

Watch RINO Senator John McCain express his concern overt the seriousness of Donald Trump Jr.’s meeting with the Russian lawyer about the lifting US sanctions on Russian adoption. It’s curious that the reporter never asked McCain about his efforts to smear our president with an unsubstantiated dirty dossier from an ex-spy:

Before we go any further into the messy details of John McCain’s international dealings to find dirt on our sitting president, it’s worth mentioning that as far as we know, no one was murdered as a result of Donald Trump Jr.’s meeting with Russian lawyer Natalia Veselnitskaya, who entered the US without a visa under “extraordinary circumstances” thanks to the efforts of Barack Obama’s DOJ. The same cannot be said about McCain’s dealings with the “dirty dossier” on Trump. Russian lawyer Natalia Veselnitskaya is also said to have ties to Fusion GPS, the sketchy secretive Washington firm that commissioned the dubious intelligence dossier on Donald Trump.

According to the Daily Caller – The Russian lawyer who offered Donald Trump Jr. damaging information about former Secretary of State Hillary Clinton reportedly has ties to the opposition research firm that commissioned the dossier on President Donald Trump.

When the June 2016 meeting took place, Russian lawyer Natalia Veselnitskaya was in New York to defend Prevezon, a Russian holding firm accused of laundering money for corrupt Russian businessmen. Veselnitskaya had been working on the case for years with assistance from Fusion GPS, the opposition research firm that compiled the Trump dossier.

Fusion GPS denied any knowledge of, or role in, facilitating the meeting between Veselnitskaya and Trump Jr.

According to The Sun: A FORMER KGB spy chief suspected of helping Brit spook Christopher Steele compile the Trump ‘dirty dossier’ has been found dead in his car under mysterious circumstances.

Oleg Erovinkin, suspected of being a key source in the compiling discredited dossier, has been found dead

Oleg Erovinkin, described as a key source behind the widely discredited document, was found dead in the back of his car in Moscow on Boxing Day.

Today, the Daily Mail reports: Sen. John McCain said he did ‘what any citizen would do’ in turning over the dirty dossier, which contained unconfirmed secrets about the president-elect, over to the FBI.

The Guardian charted the path of how the dossier came to be and how it was that McCain got his hands on the controversial documents.

The story of the dossier began with an investigative firm in Washington, D.C., being tapped by one of Trump’s primary allies to dig up some opposition research on the Republican hopeful.

In turn, that firm outsourced the research to a ‘retired western European former counter-intelligence official, with a long history of dealing with the shadow world of Moscow’s spooks and siloviki (securocrats),’ explained the Guardian.

By the time the contractor had started digging, Trump’s primary opponent had dropped out. But the firm found a Democrat who wanted dirt on the now Republican nominee instead.

The Guardian pointed out that just because a Democrat was willing to pay for the information that didn’t mean that said Democrat was Hillary Clinton’s campaign or the Democratic National Committee.

Sometimes donors seek out this information in order to ensure they’ve made a sound investment.

The contractor, who the Guardian didn’t name, but the Wall Street Journal identified as Steele, reportedly found the information that he dug up to be concerning. He and another ex-British diplomat, Christopher Burrows, run their own company, Orbis Business Intelligence.

‘If the allegations were real, their implications were overwhelming,’ the Guardian wrote.

On November 18, at the Halifax International Security Forum, McCain was introduced to a ‘former senior western diplomat’ who had set eyes on the documents and knew who put them together, telling the Arizona Republican that the individual was ‘highly reliable.’

That man can now be named as Sir Andrew Wood, British ambassador to Moscow from 1995 to 2000.

Wood told the Independent that he had met McCain, spoken to him about Trump, and about the potential for him to be compromised.

In a carefully nuanced statement he said: ‘Yes I did meet Senator McCain and his aides at the conference.

‘We spoke about the kind of activities the Russians can be engaged in.

‘We also spoke about how Mr Trump may find himself in a position where there could be an attempt to blackmail him with Kompromat [a Russian term for compromising material]and claims that there were audio and video tapes in existence.’
He added: ‘I would like to stress that I did not pass on any dossier to Senator McCain or anyone else and I did not see a dossier at the time. I do know Christopher Steele and in my view he is very professional and thorough in what he does.’

He did not however address whether he told McCain there was a dossier – and how to get it.

From there, McCain dispatched a ‘trusted emissary’ who flew across the Atlantic to meet the source of the documents at an airport that the Guardian did not name.

The aide was instructed to look for a man with a copy of the Financial Times and that’s how the individuals met, with the source taking McCain’s emissary back to his house and giving the American a copy of the documents.

Within 24 hours, the dossier was in Washington, though the contents of the file couldn’t be verified without an investigation.
McCain, the Guardian said, was worried that his actions might be interpreted as revenge for some of the controversial comments Trump made about him – such as knocking the fact that the longtime senator had been a prisoner of war.

However, McCain decided to hand over the documents to FBI Director James Comey on December 9.

‘Upon examination of the contents, and unable to make a judgment about their accuracy, I delivered the information to the Director of the FBI,’ McCain said Wednesday in a statement about that matter.

‘That has been the extent of my contact with the FBI or any other government agency regarding this issue,’ McCain said.