SMOKING GUN: San Juan Teamsters Didn’t Show Up for Work To Distribute Relief Supplies While US Aid Rotting At Ports

Teamsters are nothing more than an extension of the mob. In situations such as this, the Unions should understand that their inactions constitute extortion when they demand contract negotiations and should be charged as such!

TGP: The liberal media is pounding President Trump over the suffering in Puerto Rico after Hurricane Maria. 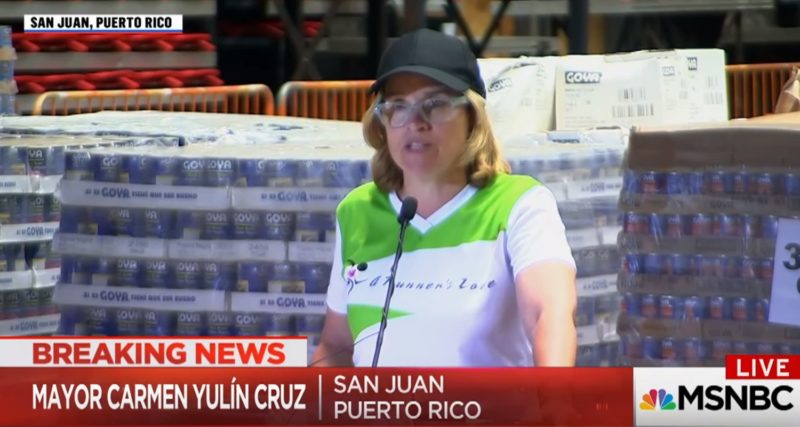 She said this while standing in front of pallets of US aid from the mainland.

Now we know why the people have no aid. The Teamsters Union drivers did not show up to work. Only 20% of drivers arrived at the ports to distribute the relief supplies.

Did mayor of San Juan mention union workers at port are on STRIKE & demanding money first before distributing supplies off boat? #amjoy

…They have the generators, water, food, medicine, and fuel on the ground, yet the supplies are not moving across the island as quickly as they’re needed.

“It’s a lack of drivers for the transport trucks, the 18 wheelers. Supplies we have. Trucks we have. There are ships full of supplies, backed up in the ports, waiting to have a vehicle to unload into. However, only 20% of the truck drivers show up to work. These are private citizens in Puerto Rico, paid by companies that are contracted by the government”.. (link)

The union is reportedly not allowing drivers to remove goods from the Port of San Juan.

US MILITARY ON PUERTO RICO: “THE PROBLEM IS NOT FEDERAL, IT’S LOCAL DISTRIBUTION” https://t.co/SvSyYRcelx via @HuffPostBlog

The relief bottleneck was out of the Port of San Juan.

Big number of semis now pulling out of Port of San Juan — this was the relief bottleneck for Puerto Rico. https://t.co/xIj5J2T5vJ

San Juan Mayor Tells Liberal Media: We Are Getting No Help From Trump... As She Stands In Front of Pallets Of Aid

SMOKING GUN: San Juan Teamsters Didn’t Show Up for Work To Distribute Relief Supplies While US Aid Rotting At Ports