Will they get the same treatment Lavoy got for taking over a building?

A large group of University of California, Santa Cruz students locked themselves inside a campus building and are threatening to stay there until their demands are met. Isn’t this a crime?

Should the university tell these whiny crybabies to go ahead and buy the paint and do the work themselves if they want the dorm painted in pan-African colors? 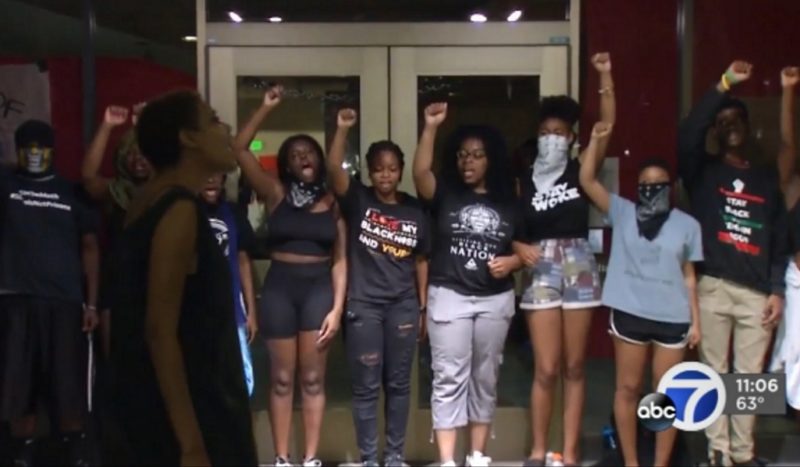 SANTA CRUZ, Calif. – A mob of social justice students commandeered the University of California, Santa Cruz’s administration building Tuesday to demand the school paint a dorm on campus in “Pan-Afrikan” colors, among other things.

“We demand that the university fund the ENTIRE exterior of the Rosa Parks African American Themed House being painted Pan-Afrikan colors (red, green, and black) by the start of spring quarter 2017,” students with UCSC’s Afrikan Black Student Alliance wrote in a list of demands to school officials. “These Pan-Afrikan colors represent Black liberation, and represent our diaspora, and the goals of our people.”

Hundreds of students stormed into Kerr Hall around 1 p.m. Tuesday and have refused to leave until university officials heed all of their “uncompromisable demands,” locking some doors with chains and stacking furniture in front of others, KGO reports.

They’ve stockpiled food and posted social justice messages in the windows, and now they’re mostly loafing around on the floor, sleeping and playing on their computers, while they wait for school officials to deliver on the demands, according to NBC Bay Area. More

Report: PC Pentagon Caves To CAIR & Agrees To This!