Virginia Social Worker: I Was Fired Over My Concealed Carry Permit (Video)

Ironic they fired her for having a concealed carry permit when they called 3 people with guns to escort her out!

If the Constitution bestows a right, shouldn’t it be illegal to fire someone for exercising that right?

Liberals are terrified of guns: any gun, used for any purpose, by anyone, anywhere, anytime. 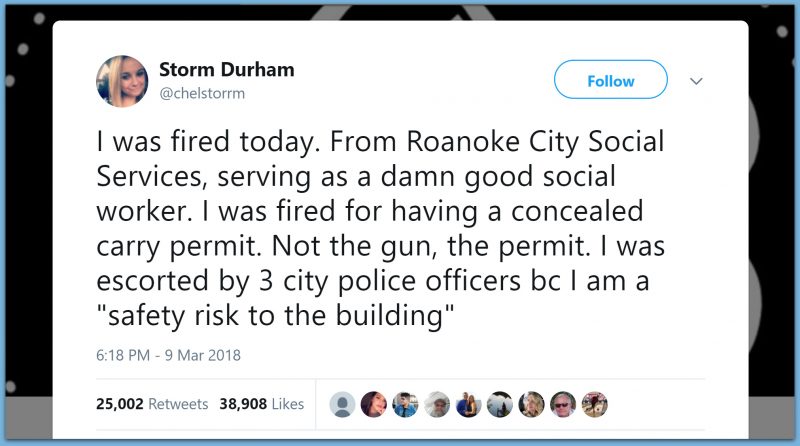 The National Rifle Association has filed a lawsuit over Florida’s new gun law, which increases the age to buy rifles in the state from 18 to 21. Republican Gov. Rick Scott signed the bill yesterday. Yet, the pro-Second Amendment organization should consider joining another lawsuit in Virginia, where a social worker was fired for being a concealed carry holder. On Facebook yesterday, Storm Durham, a social services worker, described how three Roanoke police officers escorted her out of her office. She was reportedly fired for being a concealed carry holder. The officers who escorted her out were some who had accompanied her on child services visits. Durham was also not allowed to use the bathroom on her way out due to safety concerns. On Twitter, Durham said that she’s already obtained lawyers. […]

Durham later states that she never brought her firearm to the office, and that she brought one for self-protection being a survivor of sexual assault.

“I am an American, a gun owner, and a proud sponsor of hunting across America, and I, nor my lawyers, judges, or support systems will rest until something is done until someone answers for punishing me and taking away my constitutional right,” she declared. More

I was fired today. I was fired by a Department of Virginia… Social Services the people who are supposed to be there to keep kids safe and develop families into better people for each other. I was fired today due to having a concealed carry permit. Was my gun on me? No. Has it ever been on me during my job, or visits, or anything related to work? No. When I told them that it has never been on me during work, what did they say? “How do we know that.” Search me. Do I have a criminal record? No. Do I, (yes the 22 year old blonde who is 5’2 and about 140 pounds who loves everything Disney, pink, and basic), come across as a threat to you? If you know me I’m pretty sure you’ve never been shaking in your boots due to my vary presence. But today, I was escorted by not one, not two, but three Roanoke City Police Officers to my office where I packed up months of thank you cards, and pictures of kids I’ve helped. I was escorted by officers who have been with me on visits where I placed a child with a relative due to risks, or when I was hugged by a child because they finally felt safe again. I was told to pack immediately and that I could not even use the bathroom to take a minute for myself because of my “serious safety concerns to the building.” I have a concealed carry permit. I own guns. I hunt. I target shoot. I represent Women hunters and outdoorswomen. Does that make me a criminal? Does that make me a safety risk to others? A big enough safety risk to be escorted by three Roanoke City Police officers? So scary and threatening that I need to be treated like a criminal? To be humiliated and looked down upon for owning a gun? For legally having a gun, registering that gun, and having the appropriate documentation for that gun?

The Constitution of the United States of America. The one document that has followed us for years, and will continue to be the power resource of all we do as Americans. The second amendment: the right to bear arms. The Roanoke City Department of Social Services, CPS investigations, Don Goss, Jenny Alexander, and the entire human resources department should be ashamed. They should be publically known that they did this. That they fired a innocent, clean record, white, female, college graduate who works for a living for legally registering, having, and owning a gun. That was NEVER on their property or in their building. A gun that was never used for evil, but as protection as I am a survivor or sexual assault. Protection for being that white, 22 year old, female. I am an American. A gun owner. And a proud sponsor of hunting across America, and I, nor my lawyers, judges, or support systems will rest until something is done. Until someone answers for punishing me and taking away my constitutional right.

Virginia Social Worker: I Was Fired Over My Concealed Carry Permit

She did not have her gun on her

She never brought it to her job

Virginia Social Worker: I Was Fired Over My Concealed Carry Permit (Video)