‘Girl from the Bronx’ Alexandria Ocasio-Cortez, the socialist who beat high-ranking Democrat Joe Crowley, faces questions over her ‘working class’ background after it’s revealed she grew up in a wealthy suburb north of New York City…

Such a slippery liar. Above is a screenshot of the original biography. Her family moved to Yorktown Heights when she was 2 and her father was an architect and owned his own firm. –WZ 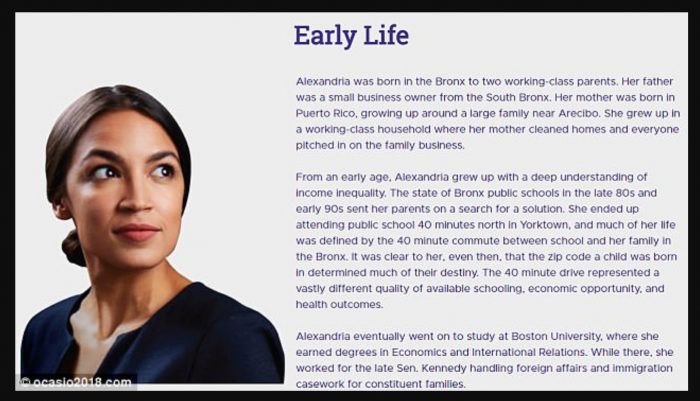 Socialist Alexandria Ocasio-Cortez has changed her biography on her campaign website after she was caught making misleading statements about her past.

Ocasio-Cortez’s biography originally stated: “She ended up attending public school 40 minutes north in Yorktown, and much of her life was defined by the 40-minute commute between school and her family in the Bronx.”

Following her win as a Democratic Socialist in the New York’s 14th Congressional District primary race against incumbent Democratic Rep. Joseph Crowley, reports surfaced that contradicted those claims. The Daily Mail reported: Though Ocasio-Cortez, 28, was born in and currently lives in the Bronx, county land records show her late father Sergio Cortez-Roman bought a quaint three-bedroom in Yorktown Heights, New York in 1991, when she was about two. More

How convenient…. AFTER she already won…

And so it goes…another newer “better” liar ..and the dems love her. Well, not Pelosi and the elder crowd! Let’s not listen to her tirades.

Isn’t even in office and lying already.

oy this woman is real trouble for any sane democratic society. Her ideals and economics just do not work well for anyone in the long run. Her plan is to turn the USA into Venezuela.

Leave her alone. She needs to practice her exaggerations, mis statements and downright lies to prepare her to be the future of the party.