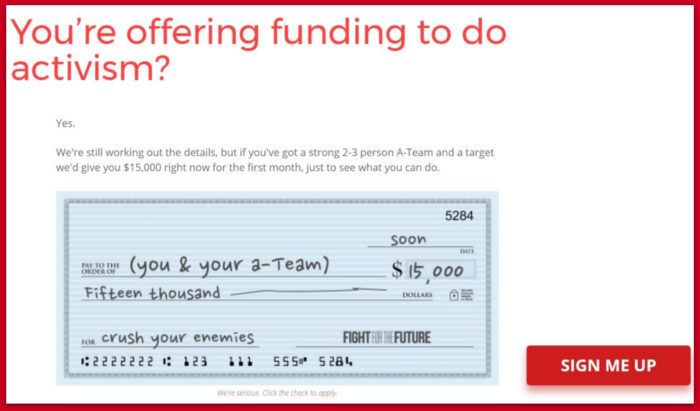 George Soros is actively organizing and threatening to take out a duly elected American president. Why isn’t he under investigation? Mr. Comey, are you listening?

The far left group Fight for the Future is offering $15,000 to activists who are willing to quit their jobs and work full time to defeat Donald Trump.

Fight for the Future is funded by Media Democracy Fund – a George Soros group.

A group known for its successes fighting digital wars, notably net neutrality, is offering $15,000 to activists who quit their jobs and form “A-Teams” to jump into a war on President Trump’s agenda.

Fight for the Future, started in 2011 as a digital activist group, on Monday issued the offer with this eye-catching opening: “Terrified about Trump? Quit your job, start an A-Team. We’ll fund it.”

“We’re currently taking applications for an initial launch of the project, and will be providing a few select teams with funding, guidance, and support,” said Evan Greer, campaign director for Fight for the Future.

“Our goal is to spawn a movement of small, dedicated, groups of people using the tactics that we’ve used effectively to defend Internet freedom to win major victories in other issue areas affecting our basic rights and freedoms, such as immigration, freedom of press, police brutality, drug reform, and government corruption,” she added. More