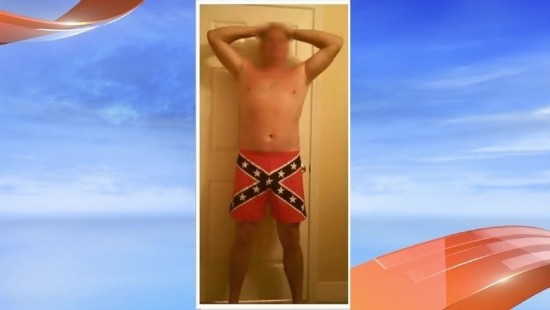 Sacrificed at the altar of political correctness.

A former North Charleston police officer says he was fired for being white after he posted a photo of himself in nothing but Confederate Flag boxers on his Facebook page.

In a federal lawsuit, Dildine claims he was on vacation at the time of the Emanuel AME shooting and of the ensuing debate over the flag, but did not know there were pictures of the accused shooter Dylann Roof draped in the Confederate Flag.

Dildine says in the filing he was also unaware North Charleston Mayor Keith Summey had voiced his support of removing the Confederate Flag from Statehouse grounds.

Instead, Dildine claims he posted the picture “to diffuse a debate that two of his Facebook friends were having over the Confederate flag issue. Plaintiff posted the picture under an alias name on his private Facebook account and did not in any way associate himself or the shorts with the City of North Charleston.”

Dildine says in a meeting the day after the photo was posted, he met with Capt.

He says in that discussion they talked about a photo Burgess posted a week earlier with members of the Black Lives Matter movement that had been published in a newspaper.

A week later, Dildine was fired and officials told him it was because of the Confederate Flag underwear picture.