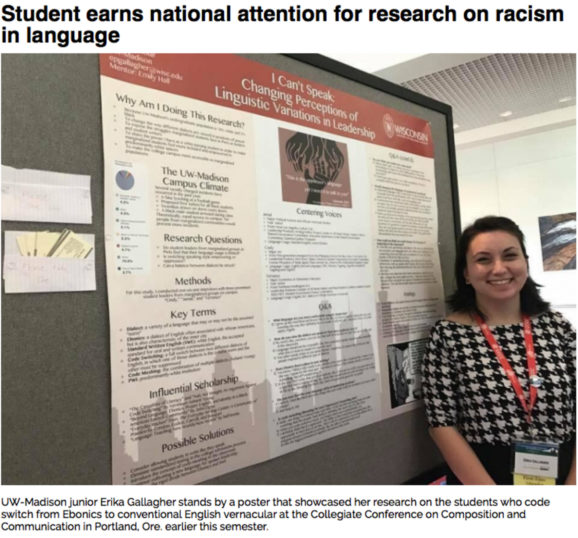 Using proper English doesn’t ‘exclude’ anyone. People choose to exclude themselves by refusing to use it. But hey, go ahead and stick it to the man by refusing the benefits of literacy… financial independence, and career success.

In classrooms across the country, students might be scolded for using “ain’t” instead of “isn’t.” But a UW-Madison student is working to erase the stigma against Ebonics, also known as African-American Vernacular English.

UW-Madison junior Erika Gallagher conducted research about code switching, also known as code meshing, in which people change their regular speech tendencies to fit into the mold of what is commonly accepted as appropriate.

Gallagher, a Posse scholar, began her research during her time as an undergraduate Writing Fellow this semester. She said she realized, as she sat in her seminar class of predominantly white students, that she wanted to focus on standard written English and how it excludes marginalized groups.

“I want to center the voices of the people who need to be centered,” Gallagher said. “As a Writing Fellow, as a white-passing person, I have a lot of power and privilege that should be shared.”

Gallagher conducted much of her research through three interviews. She talked to UW-Madison student leaders from marginalized groups and asked how they felt about code switching. She said all three “overwhelmingly” said it felt oppressive—one said “it is the biggest form of cognitive dissonance that exists.”

Obama Wrote America Is A ‘Racist Society’ In An Unreleased Manuscript