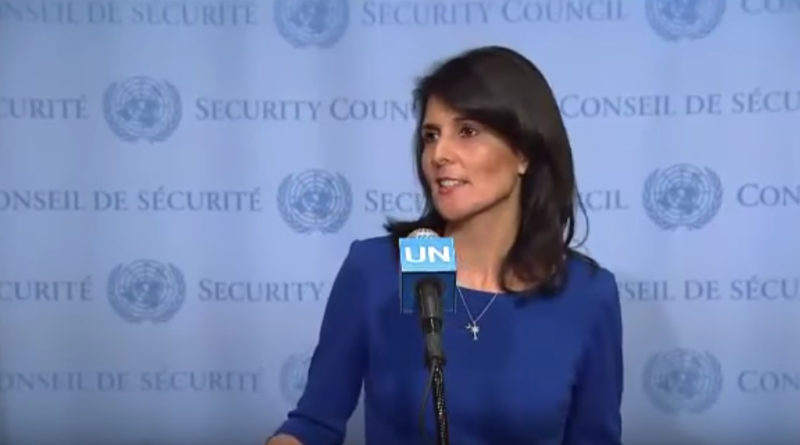 Wow, what a refreshing and truthful speech to hear on the behalf of Israel to the U.N. haters! Way to go Nikki Haley! So proud of you and President Trump for standing up to these Anti-Israel thugs! Awesome and courageous speech. Please comment below if you enjoyed this video.

Trump’s new UN Ambassador Nikki Haley just held her first press conference following the UN Security Council’s monthly meeting on Middle East issues, and this was NO ordinary press conference. After watching this video, it’s easy to see why President Trump chose her to represent the US in hopes of redefining our support for democracy in the Middle East, while identifying nations who support terrorism.

Here’s an excerpt of her speech to the press:

“The Security Council just finished its regular monthly meeting on Middle East issues. It’s the first meeting like that that I’ve attended, and I have to say it was a bit strange. The Security Council is supposed to discuss how to maintain international peace and security. But in our meeting on the Middle East, the discussion was not about Hezbollah’s illegal build up of rockets in Lebanon. It was not about the money and weapons Iran supplies to terrorists. It was not about how we defeat ISIS.  It was not about how we hold Bashar Assad accountable for the slaughter of hundreds and thousands of civilians. No, instead the meeting focused on criticizing Israel, the one true democracy in the Middle East. I am new around here, but I understand that’s how the council has operated month after month for decades. I am here to say the United States will not turn a blind eye to this anymore. I am here to underscore the iron-clad support of the United States for Israel.”

A star is born is our reaction to the first press briefing by President Trump’s new ambassador at the United Nations. The ex-governor of South Carolina was ridiculed by the Left when the president first sent her nomination up to the Hill, owing to her alleged lack of foreign policy chops. She certainly rang the wake up gong for that crowd this morning, after emerging from her first Security Council monthly meeting devoted to the Middle East. Tough as nails but with a smile and a layer of Southern charm. More