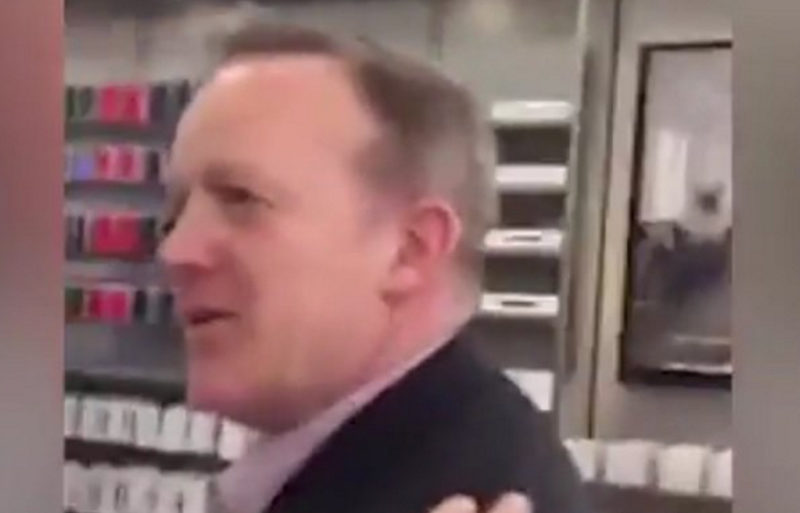 This woman who harassed and stalked Sean Spicer in the Apple Store also helped organized the physical intimidation of Betsy DeVos. See it here.

Indian-American lunatic Shree Chauhan confronted Sean Spicer at an Apple Store Saturday in the Washington DC area. Shree was calling President Trump fascist and accusing him of being a criminal. She also started blabbing some nonsense on Russia.

“Have you committed treason too, like the president?… Are you a criminal too?… What about the Russians?”

Sean Spicer was ambushed while shopping in an Apple Store on Saturday by a woman who called President Donald Trump a ‘fascist’ and accused the White House press secretary of racism.

Shree Chauhan – a 33-year-old Indian-American woman who lives in Washington, DC, and works for a non-profit – posted the video in which she walks up to Spicer and begins harassing him as he shops.

She begins by asking Spicer: ‘How does it feel to work for a fascist?’

Spicer responds: We have a great country’ while appearing to try and ignore the woman.

Chauhan fires back: ‘We have a great country? Have you helped with the Russia stuff? Are you a criminal as well?’

Here’s her response where she whines on & on!

FYI Shree: Just because you block people doesn’t mean that can’t see your profile, all one has to to do is log out & they can see it!

University Removes Scale From Gym Because It ‘Triggers’ Students

HEY BEZOS: If Vote-By-Mail Is So Secure, Why Must Amazon’s Unionizing Vote Be In-Person?
January 24th, 2021 Clash Daily

Biden’s Presidency Will Be A Catalyst For Secession – And Perhaps Civil War
January 24th, 2021 DC Clothesline