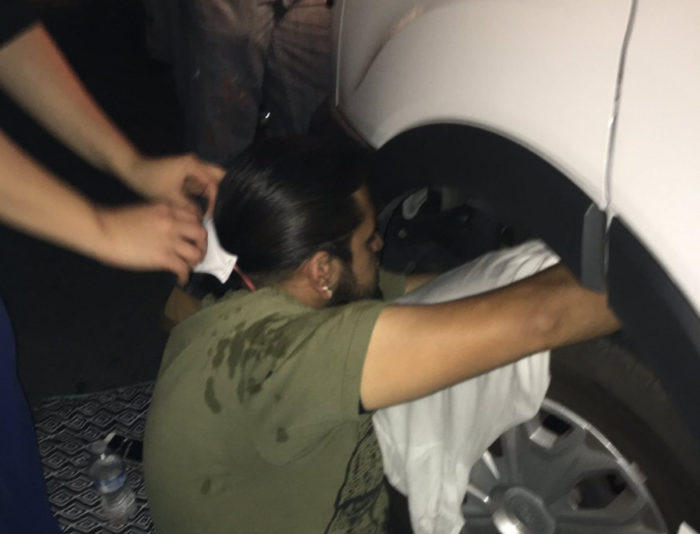 I have absolutely no sympathy for her, not a single drop. There is a good reason why we use the term illegal. She broke the law by sneaking into our country and again by committing fraud.

Protesters chanting in Spanish and English blocked an ICE van from leaving the ICE office on Phoenix Wednesday night in an effort to stop the deportation of an illegal alien, Guadalupe García de Rayos, who has been in the country for a reported 22 years since she was fourteen. García de Rayos is married and has given birth to two U.S. citizen children. She faces deportation for a 2009 felony conviction for criminal impersonation according to ICE.

The protesters surrounded the van with one man inserting his arms and legs in the wheel well. The man was reported to be have been arrested along with several other protesters when law enforcement moved in after a several hours long stand off and secured the van.

NBC reporter Gadi Schwartz posted photos and videos of the protest to Twitter.

Man has inserted his arms, leg and body into wheel well of one #ICE van that prevent it from leaving.. #GuadalupeGarcia is inside. pic.twitter.com/nTC6unb5Dx

#GuadalupeGarcia looking at her son through the window of an #ICE van. Protestors are blocking the van to halt her deportation pic.twitter.com/MRtO0lqhGZ

This is #GuadalupeGarcia & her family. Both of her kids were born in the US. She has lived here for 22 years. #Deported pic.twitter.com/Cqt668e5HX

A caravan of vehicles just left #ICE in Phoenix. protestors start screaming as they drive away. officers clear the street. #GuadalupeGarcia pic.twitter.com/sSwiIowWgV

Another view of the man in the wheel well.

Schwartz posted a Periscope report on the protest.

Live video of the protest via KPNX-TV:

KJZZ-FM reported on the background of the case and included a statement from ICE on the case.

…Garcia de Rayos has a felony conviction for working under someone else’s Social Security number. She also has kids who are U.S. citizens. The Obama administration put Garcia under supervision and required she do periodic check-ins with ICE.

Garcia de Rayos knew her status could change under Trump. Her supporters chanted in Spanish, “she is not alone,” as she walked into the ICE office with (her attorney) Ybarra Maldonado.

About an hour later, Ybarra Maldonado came out alone. He told Garcia’s family that she’d been arrested and now faces deportation.

“We’re living in an era of a war on immigrants,” Ybarra Maldonado said. “This is President Trump’s first move and it’s now time for our community to organize and fight back.”

“Ms. Garcia De Rayos is currently being detained by U.S. Immigration and Customs Enforcement based on a removal order issued by the Department of Justice’s Executive Office for Immigration Review which became final in May 2013. Relevant databases indicate Ms. Garcia De Rayos has a prior felony conviction dating from March 2009 for criminal impersonation.”…