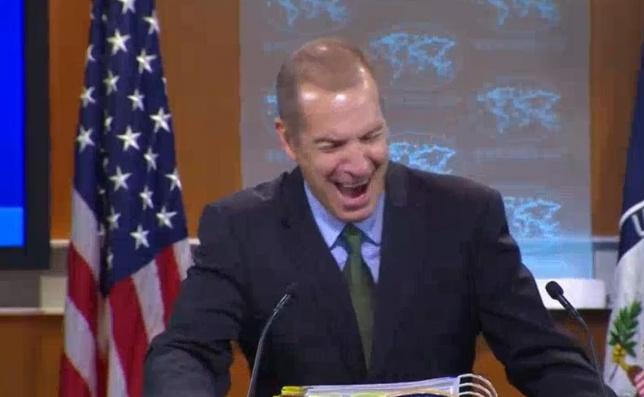 Welcome to the State Department. This administration fiddles while Rome burns… This laugh was the most honest piece of communication from him in many years.

WE: A top State Department spokesman on Thursday boasted that his department is open and transparent, but could hardly finish the sentence before erupting in laughter.

“Welcome to the State Department,” spokesman Mark Toner said. “I think we have some interns in the back. Welcome. Good to see you in this exercise in transparency and democracy.”

Toner then burst out laughing at his own comments as reporters in the room laughed with him.

“Sorry, I didn’t mean to break out laughing there,” he said. The incident prompted Associated Press reporter Matthew Lee to say, “I thought it was an exercise in spin and obfuscation.”

Toner proceeded to give a live example of why he was laughing at the idea that State is open and transparent. Toner was asked if he could share more details about the controversial $400 million cash payment to Iran, just as Iran was releasing four U.S. hostages. More

At least he’s being honest about their lack of transparency…