So now it’s just not only the Civil War that’s under assault, but religion and all of Western civilization.

None of this is about statues, or racism or even the Confederacy. It’s a coordinated attempt to undermine a duly elected president and disrupt our society. If this is all about racism and the Confederacy, why did so little of this occur when Obama was president?

CBS: Several people stopped by a statue of Father Junipero Serra in a park across from Mission San Fernando on Thursday after a photo made the rounds on social media appearing to show the statue had been vandalized. 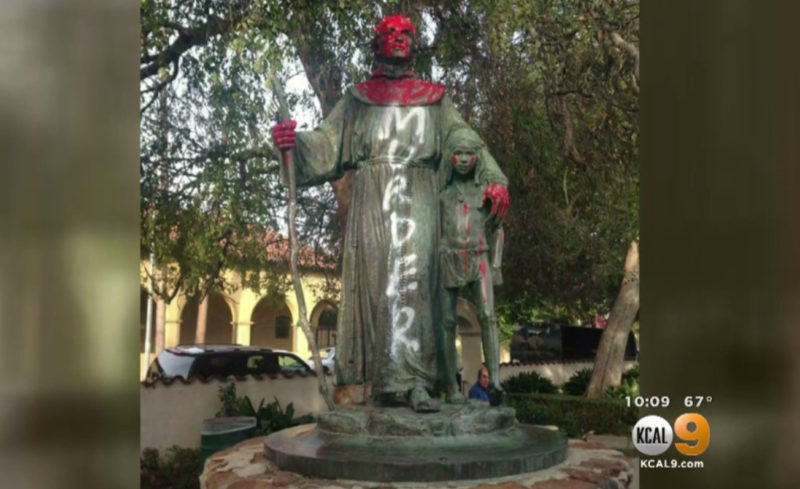 A picture circulating Facebook showed the statue spray-painted red and the word “murder” written on Serra in white.

While city officials would not confirm the authenticity of the photo or the clean-up, CBS2 reporter Crystal Cruz saw red paint on Serra’s arm and a swastika on the statue of the child standing next to him.

“Everyone’s entitled to their own public opinions and thoughts,” said Cristian Mendoza. “But once it gets to this level I don’t think it’s right.”

“I came because some friends posted a photo of the defaced statue and I wanted to see if it was in fact correct,” Paul Minette said.

The photo comes at a time when many are calling for the removal of controversial statues. Some argue Serra is not the saint the Catholic Church paints him out to be. Instead, they claim he used California Indians and destroyed part of their culture.

“I think the statue should come down from this park, and then put some appreciation to the Native people that live here,” Cristian Ramirez said.

“It’s a beautiful park for people to enjoy and for others to come and take that away from us is wrong,” Minette said. More