Who Was Steve Bannon’s First Pick For President? 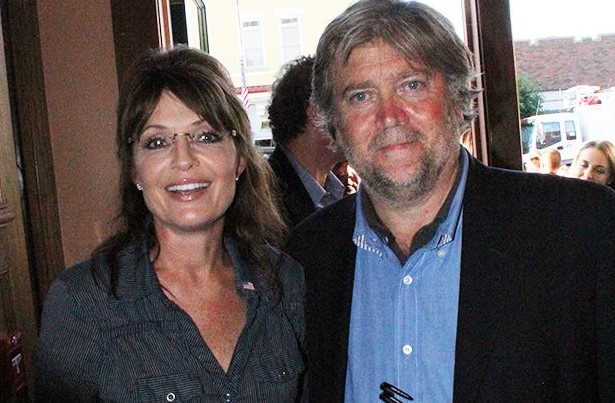 I love this picture of Steve Bannon with the beautiful Sarah. It proves that Bannon recognizes true talent. My question is… why hasn’t Sarah been offered a position yet?

Ruairí Arrieta-Kenna writes at Politico that before Stephen K. Bannon “embraced the mogul from Manhattan,” the former Breitbart Executive Chairman and current chief strategist to Donald Trump had his eye “on another gifted populist” outsider — former Alaska governor Sarah Palin. Both Bannon and Palin realized that the Republican Party needed to “drain the swamp” in DC and champion the forgotten American working class if it ever wanted to regain the White House again.

Steve Bannon thought he had found his perfect presidential candidate. This person was “an outsider,” someone who was “not part of the political establishment,” “not for sale,” with “an ‘America First’ foreign policy approach” and “a ‘Drain the Swamp’ mentality about Washington, DC.” What Bannon loved most was how this person seemed to “put the American worker—the little guy—first.”

Except Bannon wasn’t thinking about Donald Trump. The dream candidate he had in mind? Sarah Palin.

Years before the partisan provocateur of the 2016 cycle hitched himself to the upstart populist billionaire from New York, Bannon openly fantasized about transforming the former governor of Alaska into the very kind of anti-politician who could humiliate the elites of both parties, the very kind of norm-defying outsider that Trump, with Bannon’s help, would ultimately prove to be. So he put all his energy into helping the self-described Mama Grizzly eat Washington’s lunch. More

Who Was Steve Bannon’s First Pick For President?