Was Stormy Daniels High For Her ‘60 Minutes’ Interview?

When your pupils are that dilated, you’re either under the influence of drugs, the ophthalmologist just dilated your eyes with drops or you have a brain injury.

Was Stormy Daniels high on drugs for her ’60 Minutes’ interview? Twitter just couldn’t help but notice Daniels’ dilated pupils. Later came the accusations of drug use.

I personally took both of these screenshots directly from the CBS video… See here. 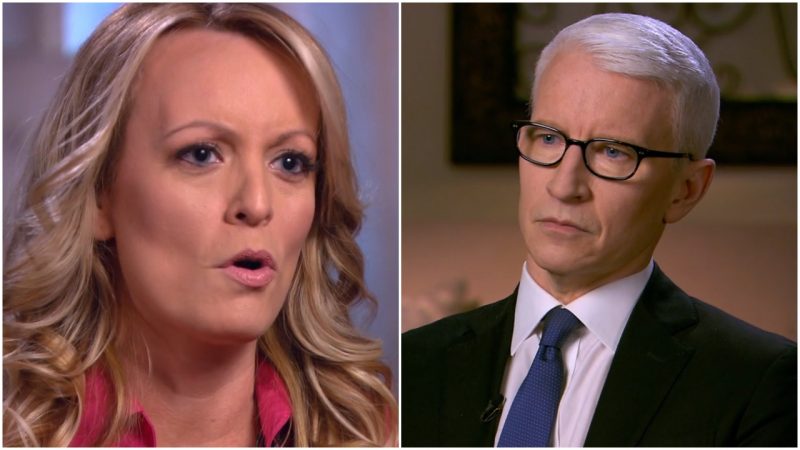 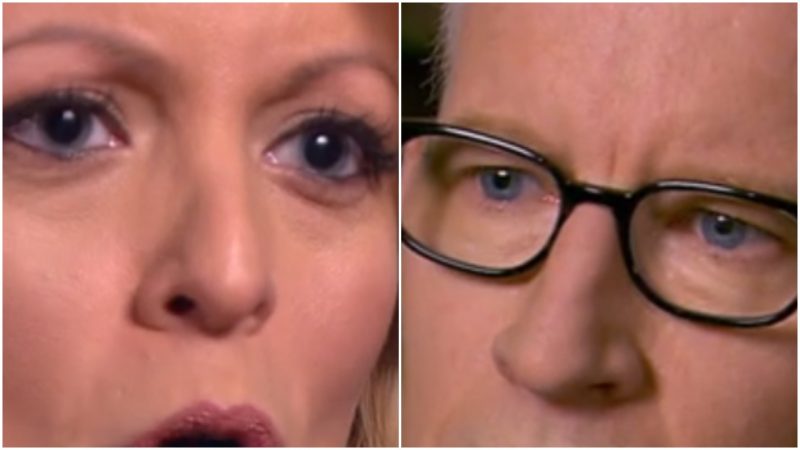 “I can’t see what color Stormy Daniels eyes are bc her pupils are so big,” chided journalist Alix Bryan.

I can’t see what color Stormy Daniels eyes are bc her pupils are so big.

Accusations of drug/medication use then followed. But first, Gizmodo explains why one’s eye become dilated due to drug use:

Pupil dilation, what’s also referred to as mydriasis, happens when one of two muscle groups become activated, namely the iris sphincter (yes, that’s what it’s called) and the iris dilator. The sphincter response is triggered by the parasympathetic nervous system (what regulates our autonomic bodily processes when we’re at rest), and the dilator by the sympathetic nervous symptom (what controls physiological responses requiring a quick response — like fight-or-flight).

Needless to say, psychotropic drugs can have a profound effect on both of these systems.

What’s up with this floozy Stormy Daniels’ massively dilated pupils during her 60 Minutes interview? pic.twitter.com/OPq6IFrhEd

“Why didn’t Anderson Cooper ask Stormy Daniels if she was coked up during that 60 Minutes interview? Pupils this dilated are not normal,” Dice added.

Why didn’t Anderson Cooper ask Stormy Daniels if she was coked up during that 60 Minutes interview? Pupils this dilated are not normal. WTF? pic.twitter.com/g6lqlfUZgF

“Pupils tend to constrict due to the bright lights used for TV interviews. Stormy Daniels Pupils vs Her Lawyer’s vs Anderson Cooper’s. Interesting.”

Pupils tend to constrict due to the bright lights used for TV interviews.
Stormy Daniels Pupils vs Her Lawyer’s vs Anderson Cooper’s. Interesting. pic.twitter.com/54GoP00zgZ

“.@60Minutes Stormy Daniels’ pupils are so large, even with bright lights in her face, you can’t see her iris’s. Can you say “medication?” tweeted author Montgomery Ganger.

.@60Minutes Stormy Daniels’ pupils are so large, even with bright lights in her face, you can’t see her iris’s. Can you say “medication?” .@realDonaldTrump pic.twitter.com/05rt9EqpT0

Oh, and did you check out her saucer-sized pupils? Maybe she had just come from the ophthalmologist? #StormyDanielsDay

It’s the first thing I notice. #StormyDaniels was probably high as a kite. Pupils don’t lie, but she does more easily when she’s on something. Cooper and .@60Minutes are complicit in the cover-up of Ms. Daniels’ condition.

“. I don’t think she is wearing contacts because in other photos they showed she had blue eyes, but her pupils are much smaller. I observed the same thing. :),” Twitter user Mila Cusumano chimed in.

. I don’t think she is wearing contacts because in other photos they showed she had blue eyes, but her pupils are much smaller. I observed the same thing. 🙂

Actress Sarah Thyre suggested to Euston that adderall could be why Daniels’ pupils are so dilated.

“Maybe. very strange bc you know she has a huge light on her in the interview. Anderson’s are normal,”  Euston replied.

maybe. very strange bc you know she has a huge light on her in the interview. Anderson’s are normal.

Before it’s brushed off as a sexist/neocon conspiracy, please note that @VICE consulted a doctor for this piece. Stormy Daniels pupils shouldn’t be that dilated. It’s perfectly legitimate to question if 60 minutes & @andersoncooper pushed an interview with a woman who was high. pic.twitter.com/GqKYAxzli0

Stormy Daniels’s eyes reveal that she was stoned on coke – see pix – everyone else’s eyes were fine pic.twitter.com/vz1cxaUnML

Stormy Daniels is higher than a kite in her interview with Anderson Cooper. Her pupils are huge!

WOW. Check out those dilated pupils on #StormyDaniels! Compare her pupils to Cooper’s, and the older photo of her. As a medical professional, I can tell ya what that means-but I’m sure you can figure it out. #DrugAbuse #60Minutes #StormyDanielsDay #StormySunday #MichaelCohen pic.twitter.com/boXKi5pekf

Stormy Daniels has to be on drugs, her pupils are to big with all those lights

Did you see Stormy Daniels’ interview on 60 minutes? Her pupils are extremely dilated. For those that have been through our training know that this happens when high on certain drugs like stimulants. pic.twitter.com/6aGlTlBdqr

what’s going on with these dilated pupils, is Stormy Daniels tripping balls lol

Watching 60 minutes interview #stormydaniels. Wish I could believe her, but the girl is high AF. Her pupils are huge even under tv camera lights. Disappointing

@StormyDaniels Do you have ADHD & on adderol or just recreating on another amphetamine? Your pupils are 3x larger than Anderson Coopers with the same direct lighting. Cant even tell the color of your eyes, theyre so big! Not being sarcastic, just curious.

Stormy Daniels was high as fuck in that interview. Look at her pupils.

#stormydaniels is under super bright lights for her interview, yet her pupils are beyond dilated. That’s weird!! Either she’s on something, or she just went to the eye doctor. #StormyDanielsDay #60Minutes #Anderson pic.twitter.com/0dT1t98bW0

I’m not the only one that noticed the pupil size of Stormy @StormyDaniels compared to @AC360 She is obviously on Drugs during the interview. #StormyDanielsDay 60 minutes

She was high as a kite during this interview; look how dilated her pupils are, you can’t see the color of her eyes. #60Minutes pic.twitter.com/Iy39rXBRnj

Stormy Daniels is on some sort of “medication” in her interview with Cooper. Pupils are dilated. I think she’s telling the truth but it’s an odd look.

@seanhannity stormy daniels pupils are so dilated…..something is up……look at all the others in that 60 minutes interview…very small pupils…..dilation signs of a lier or someone on some kind of medication

Any coincidence there running a bipolar medication commercial after during Stormy Daniels interview? Why does She have glaucoma test pupils?

Stormy Daniels pupils were NOT normal in interview…watch closely, which drug was she on?

Can someone tell us what drug Stormy Daniels is on to make her pupils that dilated during this interview with CIA albino Anderson Cooper? Because it is dilating her eyes despite the bright lights being shined at her. pic.twitter.com/BwTU7vRGIO

So 60 Minutes clearly interviewed a drugged Stormy Daniels. This is against all professional ethics. Look at her pupils. #StormyDanielsDay pic.twitter.com/owgaP80Ro8

Stormy Daniels pupils were gigantic on 60 minutes tonight. Pretty sure she was on something.

Stormy Daniels is on drugs pic.twitter.com/ygaZtfw8pD

60 minutes Stormy Daniel interview is pathetic. Am I the only one that noticed her pupils? WTH is she on.

#StormyDanielsDay #60Minutes Trying to extort @POTUS @realDonaldTrump while high on meth or cocaine might not be the best look for you @StormyDaniels @andersoncooper @MichaelAvenatti
Pupils on stormy are enormous (stimulants) and pupils on Anderson are normal in the same light pic.twitter.com/AqkaVlHyp0

I assume you’re referring to #StormyDaniels on her #60Minutes interview? ANYONE who knows ANYTHING about stimulants, KNOWS she was as high as possible! AND, even MORE troubling? She didn’t seem like it other than her pupils. Which means ONE thing! She’s NOT credible & a JUNKIE! https://t.co/4M8WKMvZqW

@60Minutes what was Stormy Daniels on that made her pupils so dilated?

@#StormyDaniels pupils really dilated. No way with all those lights. #drugs?

@StormyDaniels what medication were you on? Your pupils were very dilated. Thank you for speaking your truth. pic.twitter.com/R5Mr49QYeR

@StormyDaniels girl…You’re pupils are blown! You are either on speed or coming off.

Looks like Stormy Daniels is high as fuck! Her pupils are super dilated. 🙄#StormyDanielsDay

OMG. What drugs was #StormyDaniels on?
Pupils are YUGE pic.twitter.com/h1Ih1GL8iE

I think Stormy Daniel’s pupils may be #dilated by Propranolol. pic.twitter.com/QUvMbpwJAJ

Stormy has got to be high with those crazy pupils @StormyDaniels

Many years as a cop taught me, very well, the signs & symptoms of someone under the influence of a substance. #stormydaniels pupils were so dilated in the 60 minutes interview, she was definitely on something. Compare them to Anderson Cooper’s pupils under the same light! 👀

Was Stormy Daniels High For Her ‘60 Minutes’ Interview?