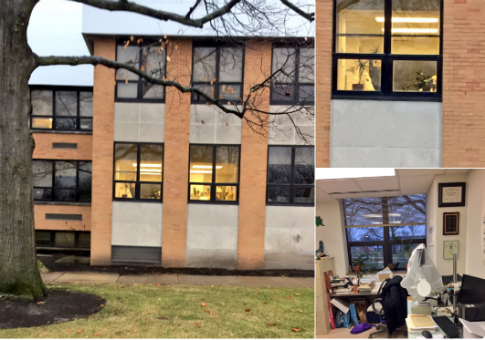 Seriously? How has this student never seen lab equipment cover upped before? And how do you mistake it for a Ku Klux Klan rally? Maybe now she won’t be so quick to judge next time.

A student at Bowling Green State University suspected she saw on Sunday a Ku Klux Klan rally taking place on campus. It turned out to be covered lab equipment.

The student was walking through campus and saw what looked like a white sheet through a window. She quickly took video footage and sounded the alarm on Twitter, messaging the university president about the issue.

There’s been an ACTIVE KKK group in Bowling Green, OH since 1922. @bgsu @PresidentMazey soo, how does this promote diversity &a inclusion?? pic.twitter.com/bmoA66Rt0O

After the student’s tweet went out, Bowling Green did some light detective work to discover the true identity of the purported Klansman. The university’s president, Mary Ellen Mazey, tweeted at the student the school’s findings.

Thanks for sharing, @autumpatrice. We looked into this. We discovered it’s a cover on a piece of lab equipment. pic.twitter.com/plkQTBr9HC

The student was relieved, but remained convinced that the white supremacist group was active at Bowling Green.

Thanks for sharing, @autumpatrice. We looked into this. We discovered it’s a cover on a piece of lab equipment. pic.twitter.com/plkQTBr9HC

It did not take long before the incident spread throughout social media, causing many mocking tweets to be sent back to the assuming student.

Were you ever so woke that you mistook a projector with a sheet thrown over it for a KKK rally? pic.twitter.com/tf6rXDj1TQ

I would laugh but these people will be preparing my coffee incorrectly in a few years. https://t.co/nCwfZruFcx

The KKK is estimated to currently have around 5,000 to 8,000 members, split between dozens of organizations that use the Klan name throughout the United States. It is unclear how many hold rallies in university laboratories.