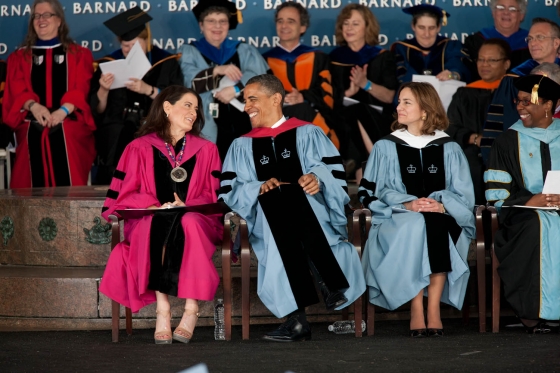 These students have a lot to learn… The most qualified person should be hired. They shouldn’t be hired on looks or sexual preference.

Following the announced resignation of Barnard College’s president, many students at the women’s college are hoping that her successor brings more intersectionality to the job.

In other words, they don’t want another white woman – and preferably not a heterosexual.

Debora Spar told the student body earlier this month she would leave Barnard in March to become the president of Lincoln Center.

Students quickly flooded message boards, expressing their dissatisfaction and sadness with how Spar had led the college and demanding that the next president look nothing like her.

Posts from a public Facebook forum, Overheard @ Barnard, show the disdain that many students have for Spar as a paragon of “white feminism.”

“Can we write a letter and get like all of the students to sign it… no more white presidents [please],” student Talia Kay wrote on the page. “It’d be great if [we seniors]ushered in our last year by advocating for the administration to hire a woman of color to fill the position.”

Student Josh Zoeller of Columbia University, which is affiliated with Barnard, then chimed in: “hire a Native American woman.”

Krish, who identifes as “he/they,” then suggested they should ask for “maybe even a TWoC,” meaning a nonwhite transgender woman such as actress Laverne Cox.

Though Spar oversaw Barnard’s transition to an admissions policy that welcomes transgender applicants who “consistently live and identify” as women, Barnard was late to the change compared to other women’s colleges.

Spar “can tend to represent a white, corporate brand of feminism that I don’t think accurately represents Barnard’s student body,” junior Elizabeth Neureiter told The College Fix in an email.

“I think choosing a candidate who diverges from the ‘norm’ of white, cis[gender], straight would be really beneficial in helping forward Barnard’s mission and guiding the college in a more intersectional direction,” Neureiter said, adding that she “would support an affirmative action policy for the new president” if possible. […]

In private online forums, many students praised the idea that First Lady Michelle Obama should be considered for Barnard’s next president. More