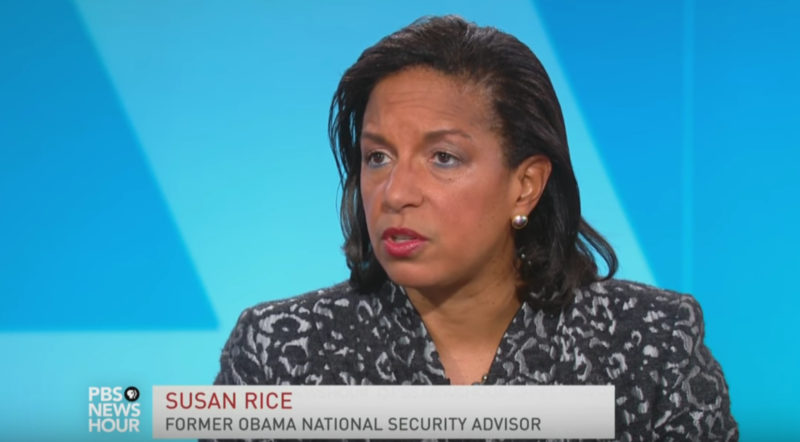 Susan Rice seems so jumpy and nervous, but we all know why because she’s hiding something huge!

She has a devious talent for denying the truth convincingly, like most Democrats. What a disgrace.

Susan Rice told another BIG whopper! In her first interview since leaving the Obama administration, she told Judy Woodruff that she knew nothing about the unmasking of people being investigated. As you’ll see in the video below, she pretty much lies through her teeth. What Circa News and Sara Carter have found in their investigation is that the computer logs tell a totally different story.

Intelligence sources said the logs discovered by National Security Council staff suggested Rice’s interest in the NSA materials, some of which included unmasked Americans’ identities, appeared to begin last July around the time Trump secured the GOP nomination and accelerated after Trump’s election in November launched a transition that continued through January.

The intelligence reports included some intercepts of Americans talking to foreigners and many more involving foreign leaders talking about the future president, his campaign associates or his transition, the sources said. Most if not all had nothing to do with the Russian election interference scandal, the sources said, speaking only on condition of anonymity given the sensitive nature of the materials.

WHY WAS SUSAN RICE ASKING FOR THIS UNMASKING TO TAKE PLACE? We say it was all political and there was no purpose for the unmasking except to damage the Trump administration.

SUSAN RICE CLAIMS TO NOT HAVE A CLUE OF THE SPYING: “I know nothing about this” – The question from Judy Woodruff is at the beginning of the video. The entire interview is interesting because of what we know now. More