Suspect Dead After He Shot 9 People At Strip Mall 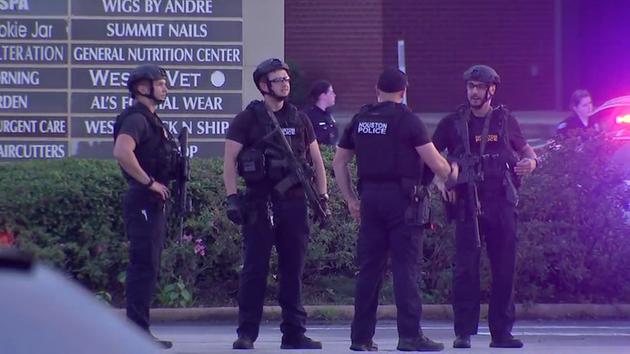 The Houston Police Department ordered a shelter in place warning and were able to shoot and kill the suspect before he injured anymore people.

Panicked eyewitnesses ducked for cover as a gun-wielding man opened fire at a strip center in southwest Houston, injuring several people before he was shot and killed by police.

Many questions remain as to a motive for the violent shooting at the Randalls supermarket strip center on Weslayan at Bissonnet.

Authorities say 9 people were taken to area hospitals after they were injured by the reported shooter.

A shelter-in-place was ordered shortly before HPD confirmed the alleged shooter was shot by one of its officers. We do not yet know the condition of the suspected shooter.

Weslayan remains closed to traffic while officers investigate the scene. Meantime, a triage center has been set up and EMS is treating victims at the scene.

An HPD bomb squad was called to the scene after a suspicious vehicle was found near the scene.

West University Elementary School said it would open on time in spite of the shooting investigation.

At around 6:30 this morning, HFD scanners reported a suspect was at a strip center firing upon vehicles. The suspect was described as a black male with a revolver.

“We received a call at 6:29 that we had a shooting at the Petco store…the first units were directed to the parking lot where the shooting was still active,” HFD’s Jay Evans says.

“We now have approximately 20 EMS personnel vehicles on scene. We do not know, we do not have a count at this time as to how many people have been shot, but all of the people will be directed to local hospitals in the area that are going to be victims.”

Emergency vehicles flooded the area around the strip center bordered by Weslayan, Bissonnet and Law Street.

Antoine Wilson witnesses the shooting and told Eyewitness News he was shaken up after being caught in the crossfire.

“I literally heard the gunshots past my face,” Wilson says. “It’s a hard pill to swallow.”

Wilson said there was a steady shooting back and forth as officers worked to bring the active shooting situation to a close. More

Hillary Gets Super-Sized Podium For Debate

NSA Analyst Says The FBI Investigation Of Emailgate Was A Sham

Suspect Dead After He Shot 9 People At Strip Mall