The MSM is not reporting the descriptions of the terrorists, but they actually did report the passenger who was recording the attack on his phone had a bag full of knives. Of course, it was TERRORISM!

A white SUV was driven into Christmas shoppers outside Flinders Street Station in the heart of Melbourne, Australia, Thursday afternoon local time, injuring over a dozen people including a child. The driver and passenger were reportedly arrested at the scene. No details have been reported about the identities of those arrested, however, police are now saying it appears to be ‘deliberate’ and have not ruled out terrorism.

Image of police dragging man from 4WD which ploughed into pedestrians in Flinders St. pic.twitter.com/ANBoKjnABR

The driver of a white car has been arrested after a car hit pedestrians on Flinders Street in Melbourne’s CBD. Report on 7 News at 6pm. #7News pic.twitter.com/c4CCvoFEb0

Another view of the passenger being dragged by police: 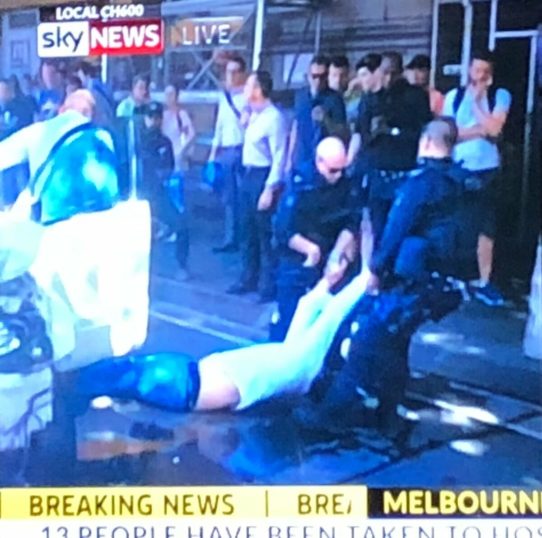 Local media reports eyewitnesses saying the driver sped through a red light hitting people, gunned the engine and targeted more pedestrians before crashing into a bollard protecting a tram line.

Video shows the moments after the SUV stopped.

Video report with details of incident:

Overhead photo of the scene:

#BREAKING: At least five people have been injured after a car plunged into pedestrians outside Melbourne’s Flinders Street station. MORE: https://t.co/7hWF4Fncpc pic.twitter.com/jHuJofk7no

Overhead video of the scene:

Photo of the injured being tended to:

Photos of alleged driver and passenger:

Two suspects being forcibly removed and detained after incident at Flinders Street.

Based on witness reports, visual profile of suspects and methodology used in this incident, it’s highly unlikely this was an accident. This looks highly intentional. pic.twitter.com/8fTfbHiKqd

Police update with video of passenger. Police say it appears this was ‘deliberate’.

The driver of a car which plowed into Christmas shoppers in Melbourne Thursday had a history of drug use and mental health issues, police said.

Acting chief commissioner of Victoria Police Shane Patton told reporters that while the crash was considered to be deliberate, there was no evidence of a link to terrorism.

Eighteen people were injured, including at least one young child, when the car hit pedestrians outside Melbourne’s iconic Flinders Street station just after 4.40 p.m. local time. Read more at FOX8.