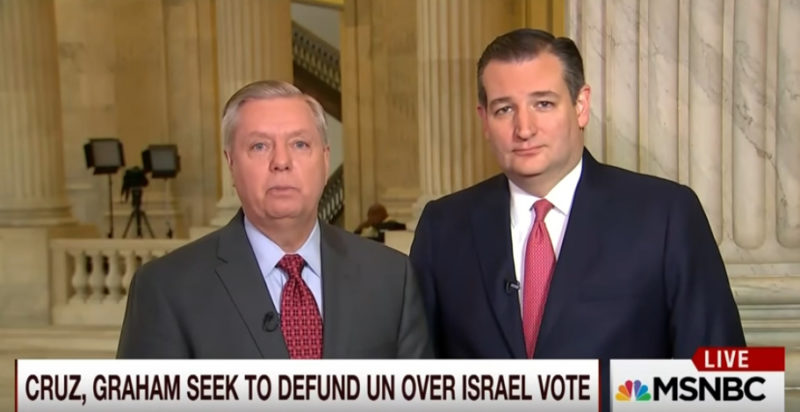 The U.N. can tell Obama “thank you” when 22% of their budget just disappears. This should be permanent too. Also, include 30 days notice that all members of the U.N. must leave U.S. soil.

On Thursday, Republican Senators Ted Cruz (R-TX) and Lindsey Graham (R-SC) introduced legislation that would defund the United Nations over the Security Council’s passage of UN Resolution 2334, which calls Israeli construction in the West Bank and eastern Jerusalem “illegal.”

The “Safeguard Israel Act” states that the U.S. government will be prohibited from giving any money to the UN, or any of its affiliates, until President Barack Obama confirms the UN resolution has been repealed and can certify that he has done so. America provides the UN with 22 percent of its budget, contributing $8 billion to the largely anti-Israel organization annually.

“United Nations Security Council Resolution 2334 falsely claims that Israel’s sovereignty over the eastern part of Jerusalem and Jewish communities in the West Bank are illegal under international law, and that the Old City of Jerusalem, along with the Temple Mount, the holiest site for the Jewish people, and the Western Wall are ‘occupied Palestinian territory,’” the Safeguard Israel Act states.

The December 23 anti-Israel resolution 2334 passed nearly unanimously despite the Obama administration’s decision to break with tradition and abstain from voting instead of vetoing it. Because the United States is a permanent member of the UN Security Council, an American veto would have automatically stopped the resolution and prevented it from passing.

“President Obama betrayed decades of robust bipartisan American support for Israel at the United Nations by permitting the passage of a biased resolution that condemns our close friend and ally,” Sen. Cruz said on MSNBC’s “Morning Joe” Thursday morning. “The Security Council’s resolution is only the latest example of the UN’s long history of obsessive hostility towards Israel.” More