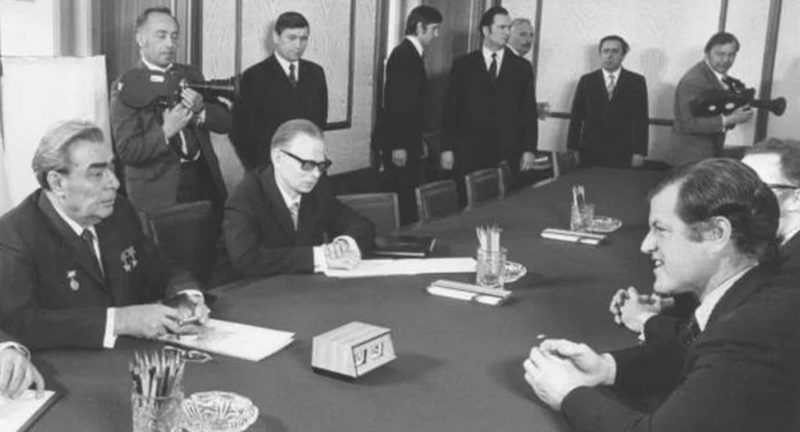 Ever notice how the Democrats always project onto Republicans the things that they do?

The hypocrisy from the Democrats is astounding. Ted Kennedy asked Russia to intervene in the 1984 election to help defeat President Ronald Reagan.

Picking his way through the Soviet archives that Boris Yeltsin had just thrown open, in 1991 Tim Sebastian, a reporter for the London Times, came across an arresting memorandum. Composed in 1983 by Victor Chebrikov, the top man at the KGB, the memorandum was addressed to Yuri Andropov, the top man in the entire USSR. The subject: Sen. Edward Kennedy.

“On 9-10 May of this year,” the May 14 memorandum explained, “Sen. Edward Kennedy’s close friend and trusted confidant [John] Tunney was in Moscow.” (Tunney was Kennedy’s law school roommate and a former Democratic senator from California.) “The senator charged Tunney to convey the following message, through confidential contacts, to the General Secretary of the Central Committee of the Communist Party of the Soviet Union, Y. Andropov.”

Kennedy’s message was simple. He proposed an unabashed quid pro quo. Kennedy would lend Andropov a hand in dealing with President Reagan. In return, the Soviet leader would lend the Democratic Party a hand in challenging Reagan in the 1984 presidential election. “The only real potential threats to Reagan are problems of war and peace and Soviet-American relations,” the memorandum stated. “These issues, according to the senator, will without a doubt become the most important of the election campaign.”

Read about the specific offers of quid pro-quo that Ted Kennedy made to the Soviet Union in the Forbes report, including offering to visit Moscow and giving them access to American media to push propaganda.

The Democrat’s obsession with Russia is reaching a fever pitch, however; they have no problem with a member from their own party literally asking Russia to intervene in an election to defeat a President.