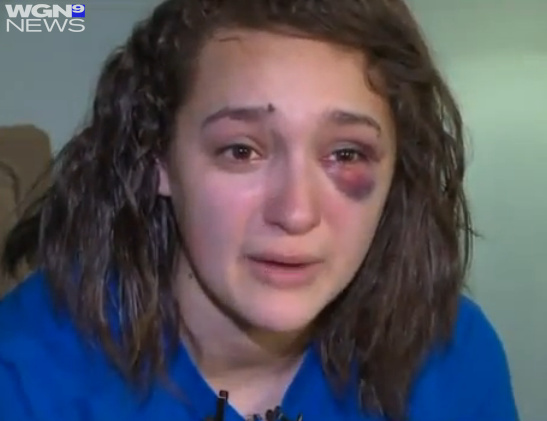 In Chicago you don’t have the right to defend yourself… much less someone else.

Police are seeking two suspects in the brutal beating of a woman who was riding the CTA Blue Line yesterday morning.

19-year-old DePaul student Jessica Hughes was on her way home to Berwyn from a morning class and says after a large group of people got off the train at the UIC Halstead stop, a man moved to the seat in front of her, turned around and attacked.

“He grabs me, pushes me to the floor and starts beating on my head repeatedly,” Jessica said.

The man wanted Jessica’s phone. It was in her pocket. A woman who was with the attacker jumped in and punched Jessica in the nose, breaking it.

All the while, two male passengers stood by and watched.

“He kept beating on me. I’m yelling help to the other people and no one came “

The suspects did not get Jessica’s phone. They ran off the train. More