Mr.Courtney, I am in total agreement with you. You make me proud to be a Texan. The media should not be trusted anymore. ABC is killing itself by bashing President Trump. I don’t watch it anymore. Same with CBS, NBC. I find them all revolting.

100%FedUp: Americans are sick and tired of being lied to by the media. This awesome patriot and business owner is making sure ABC gets the message!

SAN ANTONIO — A Boerne man is making his voice heard loud and clear by renouncing ABC News and recent news coverage of President Donald Trump with a large billboard at I-10 and Buckskin Drive.

“ABC News: I grew up with you. We are through. The Russians didn’t elect Donald Trump. I did.”

The billboard was paid for by Kyle Courtney, according to a spokesman with his company Wellstar Groundwater Technologies. 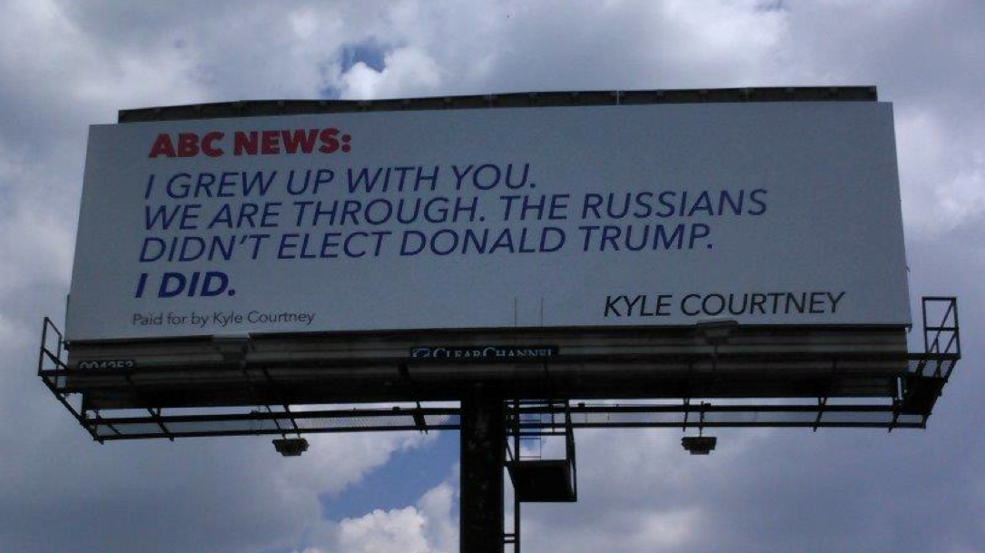 “ABC News was the only channel I watched as a child growing up in Texas but I think they have lost touch with America and forgotten the working man. They don’t represent our voice anymore. Hillary Clinton’s presidential campaign was funded by the Clinton Foundation in close coordination with the media, and now we’re seeing them try to fix what they couldn’t fix during the election. They are doing everything they can, night after night, to create narratives and sway people’s direction to impeach Donald Trump. Our democracy is at stake when a major political party and the media are in bed together. I’m not asking anyone to boycott the Democratic party. I’m not in the brainwashing business, but the liberal media is.”

The spokesman said the billboard went up today and will remain up for about two months. He also said Courtney is contemplating whether to keep it up longer and may change the message if it does stay up.

According to PR Newswire, Courtney has been in the water well drilling business for more than 30 years and has drilled more than 600 wells in the San Antonio area. – New4SA