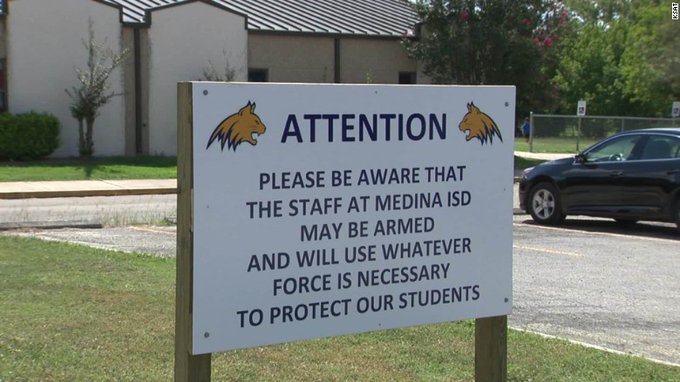 Teachers May Carry Guns And May Use Whatever Force is Necessary… This has to be one of the safest schools in Texas now.

It’s a sign of the times in South Texas: welcome to the wild west!

The Medina Independent School District put up a sign warning parents and students the Medina faculty may be packing heat and not afraid to use it.

“I think that anybody who might have a thought about harming someone in mind would think twice about it,” Medina ISD superintendent Penny White suggested.

“I don’t have a problem with that at all,” Medina resident Rod Grunwald said. “That’s good.”

Officials say having faculty carry firearms is just being practical since they don’t have quick-response security nearby.

But up the road a spell south of Fort Worth at Tarleton State University, the campus carry law resulted in it’s first incident when a licensed gun owner accidentally fired their weapon in a student dorm.

The school hasn’t identify who the person was but said no one was hurt and the misfire resulted in only minimal property damage.

Still, it’s that type of accident that has some parents concerned in Medina.

But for now, it looks like Medina students may be studying the Old West!