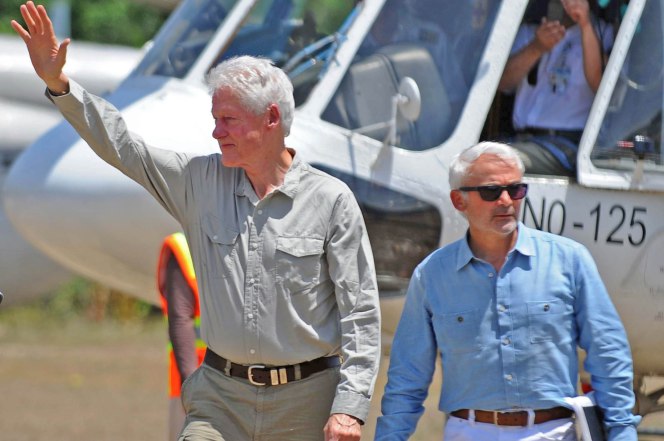 If this Haiti Development Fund was created by the Clinton Foundation to help rebuild after an earthquake, why has Haiti not seen the benefits of this fund?

The inner workings of a mysterious off-the-books arm of the Clinton Foundation were partially revealed in the hacked emails of Hillary Clinton campaign chairman John Podesta.

The little-known Haiti Development Fund, an LLC incorporated in Delaware in August 2010, was created by the Clinton Foundation with an initial endowment of $20 million from shady Canadian mining mogul Frank Giustra and Mexican billionaire Carlos Slim.

The Fund was supposed to supply desperately needed seed money to Haitian entrepreneurs after an earthquake devastated the country in January 2010.

But The Post found only one project that it funded with a fraction of the start-up cash.

Since the Fund is incorporated as a private entity and not a non-profit, it is not subject to the same disclosure rules as a public charity.

The for-profit Fund was managed by Jean Marc Villain, who was going through a bankruptcy in 2010 when he was working for the Clinton Foundation. The non-profit paid him an annual salary of $100,000 to oversee the Fund, according to pay records attached to the Podesta emails.

The Florida Elections Commission found that Villain also had violated state laws in 2001 when he did not file donation reports for the Haitian-American Political Caucus, a political committee where he was listed as treasurer.

“This cries out for an audit or an investigation,” said Ken Boehm, chairman of the National Legal and Policy Center a Virginia-based watchdog group. “Its director was in bankruptcy and there’s almost nothing in the public record showing what happened to the millions of dollars it supposedly was going to use to help poor Haitians.”

Giustra, one of the biggest donors to the Clinton Foundation, is also no stranger to controversy. In 2005, he and President Clinton traveled together to Kazakhstan to meet with the former Soviet republic’s authoritarian leader. Days after that meeting, Giustra acquired uranium assets in three of the country’s state-run mines — a venture valued at more than $3 billion. Both Giustra and Clinton have denied that the former US president helped him cement the Kazakh deal. More

Judge Jeanine Does It Again: Hillary Is Too Corupt