But don’t dare put restrictions on Food Stamps or EBT card purchases all of which are unearned ‘benefits’.

Veterans deserve to get free college. Of all citizens who want to attend college, the veteran is the most deserving!

Military Times: A congressional proposal to make service members buy into their Post-9/11 GI Bill benefits surprised veterans groups on Tuesday, with advocates divided over whether it amounts to a long-term fix for the benefit or an unfair bill for veterans. 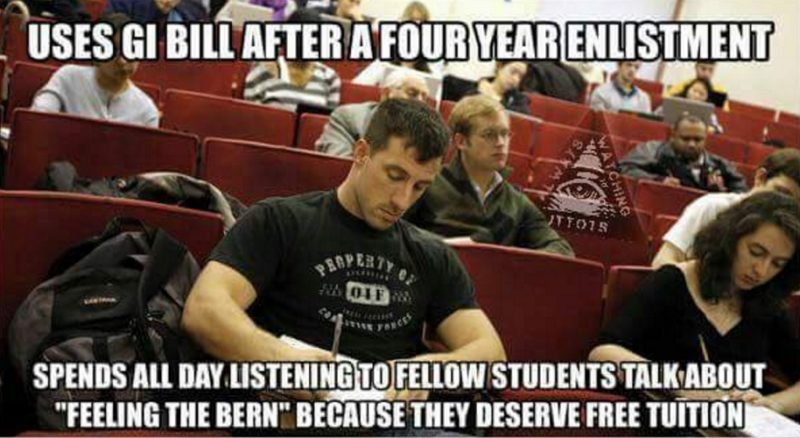 “This new tax on troops is absurd,” said Veterans of Foreign Wars National Commander Brian Duffy in a statement. “Ensuring veterans are able to successfully transition back to civilian life after military service is a cost of war, and not a fee that Congress can just pass along to our troops.

The plan — draft legislation from House Veterans Affairs Committee Chairman Phil Roe, R-Tenn. — would deduct $2,400 from future service members’ paychecks to establish eligibility for revamped post-military education benefits. This was first reported Tuesday by Task & Purpose.
Currently, the post-9/11 GI Bill offers full tuition to a four-year state college (or the equivalent tuition payout for a private school) plus a monthly housing stipend to any service member who spends at least three years on active duty, and to reservists who are mobilized to active-duty for extended periods. Troops wounded while serving are also eligible.

Unlike the older Montgomery GI Bill benefit, the post-9/11 GI Bill does not require any fees or pay reductions for eligibility. The new proposal would change that, taking up to $100 a month from new enlistees’ paychecks for the right to access the benefit after they leave the ranks.

The money collected would amount to a fraction of the overall cost of the veterans education benefit. Congressional staff estimate the move would bring in about $3.1 billion over the next 10 years, while total GI Bill spending is expected to total more than $100 billion over the same decade.

Supporters of the plan say having service members “buy in” to the benefit would strengthen it against periodic attempts by budget planners to trim veterans education benefits. Last year, veterans advocates sparred over proposed cuts to GI Bill benefits given to the children of troops, and a plan to cap some housing stipends connected to the program. More

The Knives Are Out: Hillary Clinton's Camp Scrambling To Find Out Who Leaked Embarrassing Information