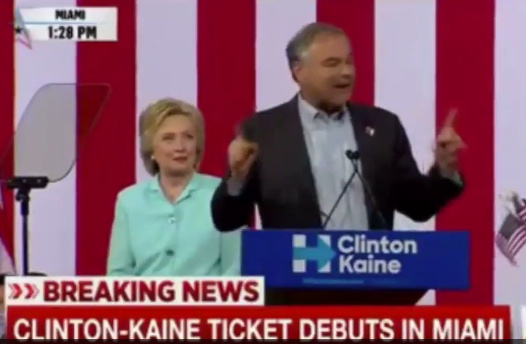 Sen. Tim Kaine (D-VA) was officially announced as Hillary Clinton’s running mate in Miami this afternoon as she introduced him as a “progressive who likes to get things done.”
“Hey, guys. Thank you!” he said as he took the podium, before immediately launching into a message in Spanish.

Kaine repeatedly referred to his missionary work in Honduras, where he learned to speak fluent Spanish.

“In our administration in the first 100 days we’ll put forward a comprehensive immigration reform package that includes a path to citizenship.” More

A roundup of Sen. Tim Kaine showing off his Spanish during today's rally in Miami pic.twitter.com/ApWWXGl2dK

Judge Jeanine Pirro: Which America Is It That You See? Trump Vs. Obama