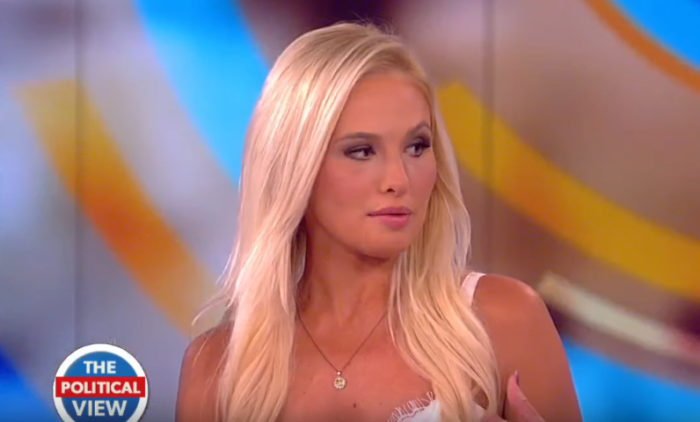 Tomi Lahren appeared on The View and held her own in a fiery exchange as she was surrounded by ultra left wing women who absolutely despise President Donald Trump.

So was Whoopi Goldberg missing in action because she’s not that intolerant of other viewpoints? Wink… wink!

The View: “Why do you think you resonate with so many people?”

Tomi Lahren: “I think in large part I represent middle America. So you’ve got the two coasts and those individuals seem to just kinda talk to each other and then you’ve got all of middle America right there that’s dying to have a voice. They don’t really feel like they have one. They’re not represented you know beyond their communities so I think they watch me and they say you know she speaks like I do, she thinks like I do…she seems to maybe get it..”

Of course the women on The View brought up the Russian conspiracy and Tomi hit back with the wiretapping story that the media refuses to acknowledge has any merit.

Joy Behar: “I would like to ask you woman to woman..umm is it difficult for you to support Trump as a leader when he treats women so poorly…the things he said about women? Remember that horrible tape..?”

Joy Behar: “What did she (Hillary) say that was so horrendous?”

Tomi Lahren: “She stayed married to Bill Clinton. So she gave him a pass then?”

The audience erupted in applause. Clearly the people in the audience are also disgusted with Bill and Hillary Clinton. Way to go, Tomi!