Sex-change surgeries cost an average $132,000 each. Just one of the problems… If it’s not an illness or medical condition then I don’t see why it is necessary to pay for these completely elective medical procedures. Just call me crazy or something. Meanwhile, vets are dying from lack of real medical care.

It’s the military’s job to get you strong enough, tough enough, and trained enough to go to war.

Here’s The 24 Republicans Who Think The Pentagon Should Pay For Transgender Surgeries Here. 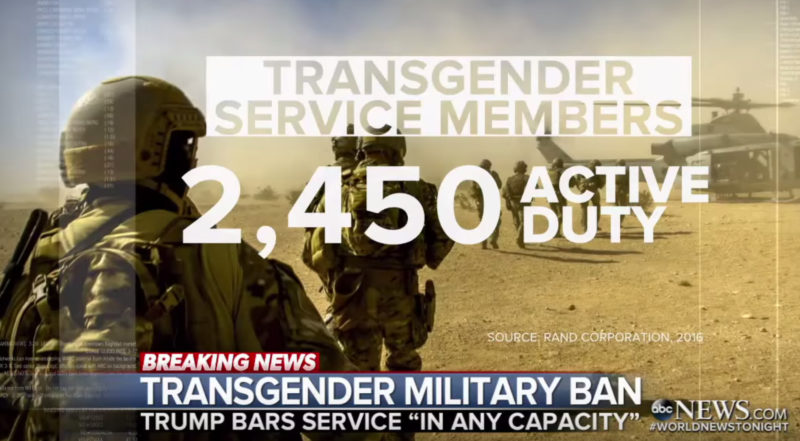 TGP: With President Trump’s recent military transgender ban causing widespread liberal outrage, it is imperative to examine the real fiscal cost of trans enlistment into the armed forces. According to the Washington Free Beacon, over the next 10 years, tax- funded transgender surgeries would cost $1.3 billion.

It is astounding how many put the “social justice” agenda before the burden of this nation’s hardworking taxpayers as well as the functional needs of the military. Each transgender surgery cost approximately $132,000. That expense multiplied by the .7% of the U.S military population that identifies as transgender, and would potentially need gender identity related medical treatment, generates a hefty financial cost.

President Donald Trump announced Wednesday that transgender individuals will not be eligible to serve in the military, with the White House citing cost and military readiness concerns.

Internal data provided to the Washington Free Beacon from Rep. Vicky Hartzler (R., Mo.), a leading opponent of taxpayer-funded sex changes, show that even by using a conservative estimate, the costs associated with 0.7 percent of the military population is great.

Hartzler’s office provided a detailed calculation that shows estimates of the current number of transgender service members, and the number likely to seek a taxpayer-funded gender transition. More

According to the National Transgender Discrimination Survey, 30% of transgender individuals say they want to have various sex reassignment operations in the future. It is silly to think that service members would be excluded in the implication of this statistic.

“Our military is the most effective, efficient, and well-funded fighting force in the world, and as the president notes, we cannot burden our armed forces with the tremendous costs and disruptions that transgenders in the military would entail,” she said. “With the challenges we are facing across the globe, we are asking the American people to invest their hard-earned money in national defense.”

“Each dollar needs to be spent to address threats facing our nation,” “The costs incurred by funding transgender surgeries and the required additional care it demands should not be the focus of our military resources.”