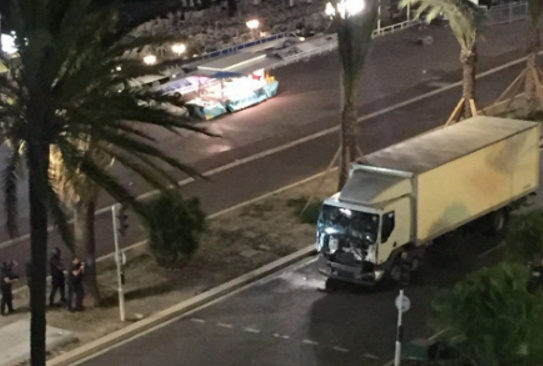 Police reportedly were in shoot out with driver and he is dead. But descriptions are of bodies all over the Promenade of Angels, because people were standing shoulder to shoulder for a fireworks display.

Nice (France) (AFP) – The mayor of the French city of Nice said dozens of people were likely killed after a van rammed into a crowd marking Bastille Day celebrations in the French Riviera resort on Thursday and urged residents to stay indoors.

“The driver of a van appears to have killed dozens. Stay in your homes for now. More info to follow,” mayor Christian Estrosi wrote on Twitter.

Injured and dead strewn over road. Media wondering who was in the truck. Here’s a hint: Islamic terrorist.

Police now concerned a possible accomplice is on the run. There is also a report of hostages being held by accomplice at a nearby restaurant in a hotel.

Gunshots rang out in the streets, with gunmen targeting hotels and cafes in the port city as residents were warned to lock themselves in doors for their safety. Hostages have been taken in a hotel in the city. The RAID anti-terror squad has been deployed to the city.

It is believed the gunmen are holding hostages in the Meridien Hotel, the Hotel Negresco and the Buffalo Grill restaurant.

Truck drove over people who were all lined up for a significant distance, video so bad, media is not even posting it.

Interior Ministry are now claiming there is no hostage situation at this time.

As many as 73 are now reported dead from Sky News.  Multiple weapons found in the truck, indicating premeditated attack.