The UNHRC is a total joke. Just take a look at its members. Withdrawing from it would be a good first step. We need to get out of the UN entirely. The UN’s fake “human rights” are the opposite of the rights our founders enshrined in the Constitution that are granted to us by God!

WZ: How good it is to once again have a president and an U.N. Ambassador who will defend America and our allies. 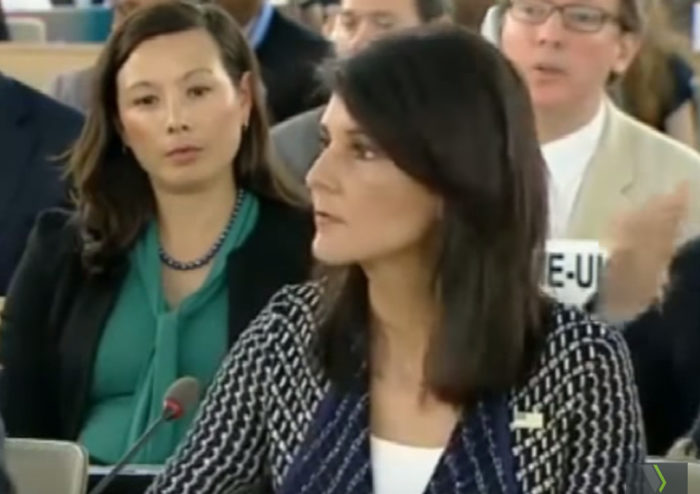 Daily Caller: The U.S. is expected to issue an ultimatum to the United Nations Human Rights Council Tuesday: either remove anti-Israeli bias or America may withdraw.

U.S. Ambassador to the U.N. Nikki Haley said Saturday that Washington would decide whether to withdraw after a three-week session in Geneva, Switzerland wraps up this month, according to Reuters.

U.S. Diplomat Michele Sison spoke out against what the U.S. considers “unfair singling out of Israel” during a closed session of the U.N. Security Council May 24. The U.S. has long been a critic of the council, leading to a three-year boycott from 2006 to 2009 under former President George W. Bush.

The Trump administration took issue with the most recent U.N. report that asserted Israel was endangering the territorial viability of a potential sovereign Palestine by vastly accelerating the pace of housing announcements for Jewish settlements in the West Bank.

The U.S. historically vetoed U.N. Security Council resolutions that condemned Israel for years. That pattern changed in December when former President Barack Obama’s administration allowed a critical resolution to take effect by abstaining rather than vetoing the resolution.