Well, it sounds like it should be marketed as fiction, or even perhaps even fantasy.

This tells me that he knows what he is libel and he’s saying it’s “just a version that I believe” as a preemptive strategy should he and the publisher be taken to court.

But yeah, hey, media run with that. And he’s basically saying because he thinks Trump is a liar that gives him license to say anything he wants. Fine journalism there. But many in MSM are running with the claims as though they were true even when parts have already proven to be false in addition to the disclaimer.

For example, it claims that Roger Ailes suggested John Boehner for a position to Trump. Leaving aside that unlikely event, the book then tells you Trump’s response was ‘Who?” But Trump has multiple tweets over years talking about Boehner and he’s even golfed with him. So he obviously knows him. But it’s put in there to make him sound dangerously ignorant because that serves the narrative. –WZ 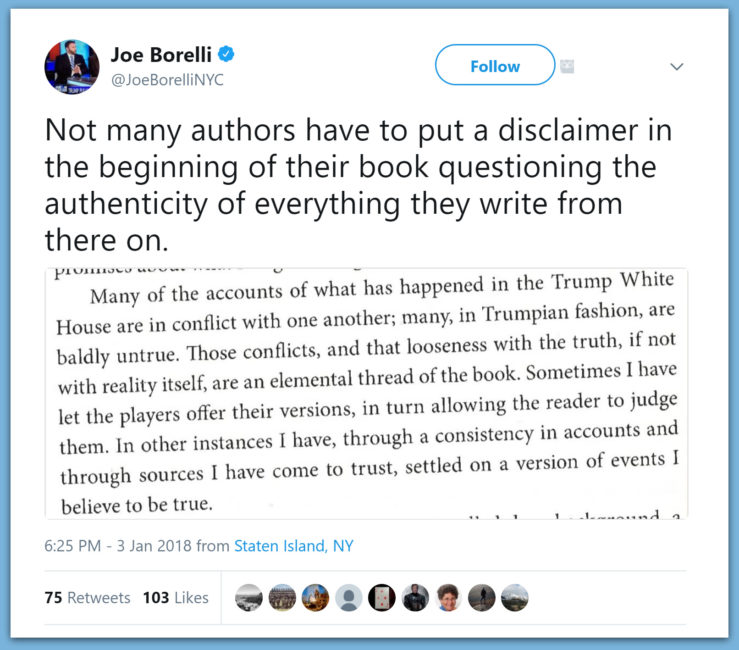 How ironic to see CNN talking about “fact-checking…” When CNN has the higher ground of journalistic integrity, you are well below ground.

“We should mention that it sounds like Michael Wolff’s modus operandi was to let the people he interviewed spin yarns,” the “New Day” co-host said, said regarding “Fire and Fury.”

“This isn’t really journalism. This is a very interesting read but in terms of the way he processed them, he admits in the author’s note that he let people tell their own stories and he printed them,” she concluded. Read more The Hill.

Can We Trust Wolff?

Many have already raised questions about factual accuracy in the book. Wolff claims the book was written through 200 interviews with Trump staff and friends over a period of 18 months. The White House claims that Wolff never interviewed Trump himself for the book (they say Wolff spoke to Trump once on the phone in a conversation about an article that Wolff wrote) and only had “over a dozen interactions” with White House staff.

Journalists have pointed to questionable parts of the book, including an entire quoted dinner conversation between Bannon and Ailes, the anecdote that Trump wasn’t familiar with John Boehner when considering chief of staff options (despite numerous documented interactions and quotes that indicate the contrary) and a segment claiming that Robert Mercer offered the Trump campaign $5 million despite clear and well-known campaign finance laws against it.

While these parts do indeed raise questions, Wolff disclaims in the book that there are logical inconsistencies, but frames them as an inherent part of reporting on the Trump presidency. Read more DIGG.