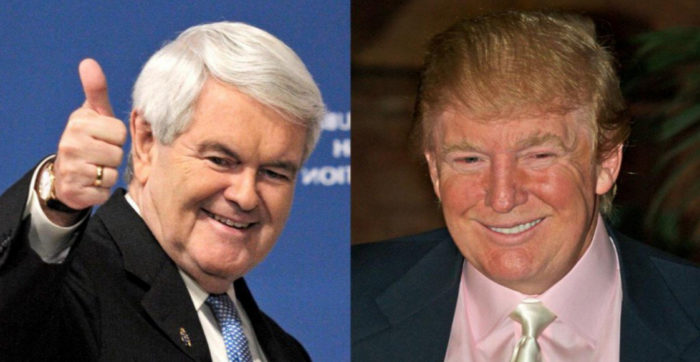 Yea Newt. Would be the best choice, EVER!

Donald Trump revealed on Fox and Friends that Newt Gingrich is “absolutely” on his shortlist for vice president.

Trump called the former House Speaker a “tremendous supporter,” but declined to name anyone else on his VP list.

EXCLUSIVE: @realDonaldTrump reveals @newtgingrich is “absolutely” on his short list for VPhttps://t.co/vbtA3ksvIG

He was also asked to respond to Hillary Clinton’s latest criticism, which was on his proposed temporary Muslim immigration ban.

She said the idea sends a signal of “disrespect” to Muslim nations that the U.S. needs to work with.

Trump called her statement one of the “dumber” things he’s ever heard.

“She is so ill-equipped to be the president. If anything, it’s just the opposite. They’re going to have to learn that we can’t take this anymore and they’re going to have to turn in the people that are bombing the planes. And they know who the people are. We’re not gonna find the people by just continuing to be so nice and so soft. I have many Muslim friends and they agree they have a tremendous problem with radical Islamic terrorism,” said Trump. More