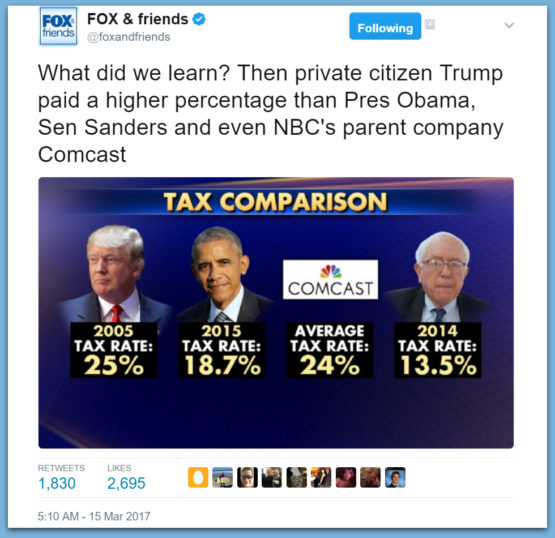 It must be said, those who pay less in income taxes are the same ones who demand ‘sacrifice’ and ‘sharing of the socialist pie’ from everyone but themselves…

What did we learn? Then private citizen Trump paid a higher percentage than Pres Obama, Sen Sanders and even NBC’s parent company Comcast pic.twitter.com/bG2RUevt3F

With all the talk of President Trump and his 2005 tax return, let’s put what he paid in perspective, shall we?

Trump in 2005 paid a higher tax rate than President Obama and Sen. Bernie Sanders in 2015 and 2014 respectively, as well as a higher percentage than Comcast’s average tax rate. Comcast being the parent company of nothingburger journalist Rachel Maddow’s employer, MSNBC. More

Dear Rachel Maddow: While You’re On The Subject Of Taxes… How About Exposing This?