President Trump joined Judge Jeanine by telephone.  What he and Judge Jeanine didn’t say is the hottest news item in this incredibly newsworthy interview.

We are all disappointed with AG Sessions. Even those that like him personally like Tom Fitton and Laura Ingraham. Jeff Sessions lack of action on this only undermines the justice system. 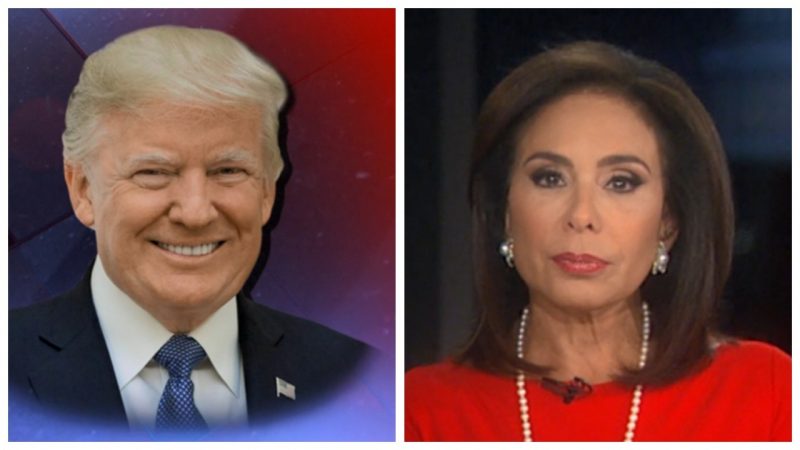 President Trump started off the interview discussing the Democrat nothing-burger memo that was released on Saturday.  As noted last night by TGP, then President Trump BLASTED Democrat Adam Schiff accusing him of illegal activity.

President Donald Trump: Well all you do is you see this Adam Schiff he has a meeting and he leaves the meeting and he calls up reporters and all of the sudden they have news and you’re not supposed to do that. And it’s probably illegal to do it. You know he’ll have a committee meeting and he’ll leak all sorts of information. You know, he’s a bad guy.

President Donald Trump:  A lot of bad things happened on the other side, not on this side but on the other side, and someone should look into it because what they did is really fraudulent, and somebody should be looking into that.  And, by somebody, I’m talking about you know who.

Judge Janine:  I have a feeling I know who it is Mr. President.

Both the President and Judge Janine were referring to AG Jeff Sessions, of course.

AG Sessions has been missing in action his entire time overseeing the Justice Department for the US Government.  He recused himself from anything Russia and has done nothing to bring justice to the individuals involved in the Obama – Clinton Administration who committed numerous crimes.  He is responsible for the sham Mueller investigation.

Hillary’s email investigation was an entire fraud.  The players in the investigation who committed criminal acts by lying to the FISA Court, hiding information, destroying information, and more, are still employed and being paid by US taxpayers.  The DOJ and FBI continue to stall and refuse to cooperate with Congressional oversight investigations and when they finally do, they redacted so much that the information is illegible. Read more at TGP.

You looked ELEGANT Tonight Jeanine. Your show & open were & are entertaining & the TRUTH ☆ We enjoyed hearing our Great Beloved President Trump Judge ♡ I Feel more like a real AMERICAN Everyday !!! We are Fortunate to live in this GREAT Country !!! ♡♡♡

@JudgeJeanine Great interview with @realDonaldTrump , the conviction in his beliefs voice and truism is undeniable.

Trump is my PRESIDENT, he makes me proud, my country is a strong country again. We are leaders. Thank you President Trump. pic.twitter.com/kJCRl2Nm2u