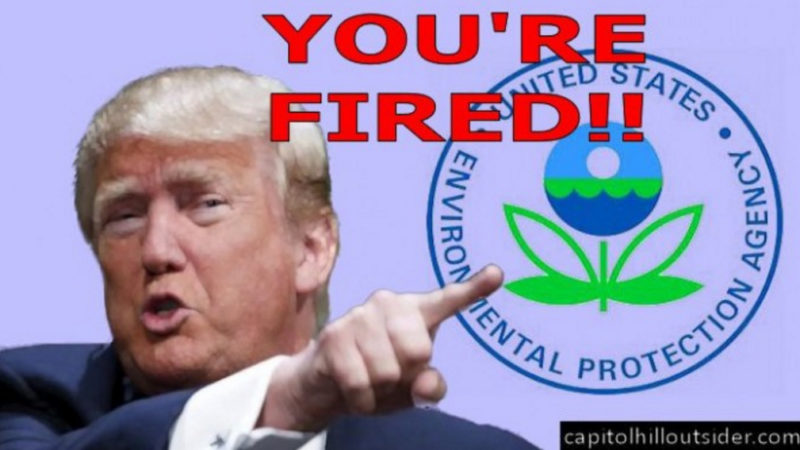 Cut the EPA’s 15,000 employees in half & see how it works out? It just can’t this get any better than this!

The EPA destroyed itself with arrogant, abusive actions that took it down.

The former leader of President Donald Trump’s EPA transition team said Thursday he expects the president to slash the agency’s budget and staff.

Myron Ebell, the director of the Center for Energy at free market group Competitive Enterprise Institute, told reporters that Trump is considering reducing by magnitudes the agency’s workforce. It currently stands at 15,000 employees nationwide.

“Let’s aim for half and see how it works out, and then maybe we’ll want to go further,” Ebell said, referring to his wish to see the EPA slashed by at least half. He left Trump’s transition team last week, but was at one time on the president’s short list to head the agency.

Half of the EPA’s budget is transferred to state and local areas to update infrastructure projects and environmental cleanup efforts. Ebell, who is a long-time EPA critic and climate skeptic, said the cuts would likely fall on the remaining half of the agency’s budget, which supports a portion of federal employees.

“President Trump said during the campaign that he would like to abolish the EPA, or ‘leave a little bit,’” he said. “I think the administration is likely to start proposing cuts to the 15,000 staff, because the fact is that a huge amount of the work of the EPA is actually done by state agencies.” More