Trump issued full pardons to Oregon ranchers Dwight Hammond and his son Steven Hammond who were embroiled in the Bundy Ranch dispute of 2014.

The White House blasted the Obama regime for its “overzealous” appeal that resulted in the Hammonds being sentenced to five years in prison. This going to set off some on the left.

LaVoy Finicum is still dead Mr. President. Now its time to go after the agents who wrongfully murdered him… 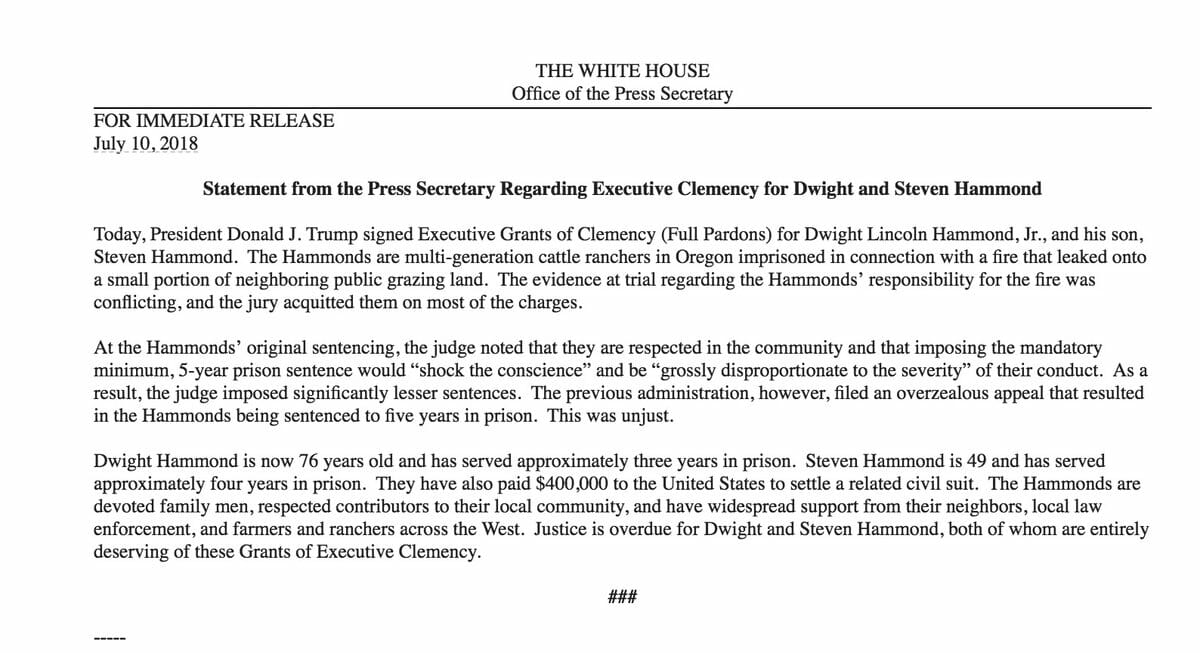 President Donald Trump pardoned two Oregon ranchers forced back into prison in 2016 to serve out the rest of the mandatory minimum sentence required under an anti-terrorism law.

“The Hammonds are multi-generation cattle ranchers in Oregon imprisoned in connection with a fire that leaked onto a small portion of neighboring public grazing land,” the White House said in a statement. “The evidence at trial regarding the Hammonds’ responsibility for the fire was conflicting, and the jury acquitted them on most of the charges.

Dwight and Steven Hammond were convicted of committing arson on federal land in 2012 under an anti-terrorism law from 1996. The U.S. District Court judge who sentenced the ranchers believed the mandatory minimum sentence was too harsh, thus both men served short stints in prison.

The Hammonds served their time, but federal prosecutors appealed the case and got a federal court to overturn the 2012 judgment. The Hammonds were forced back into prison in 2016 to serve the rest of their sentences. More

Trump has virtually dismantled Obama’s legacy and policies in less than 18 months. He loves to drop a bomb on lefties every day. I believe he enjoys making their heads explode.

I LOVE OUR @POTUS FOR THIS EXPERT TROLL ON #CowAppreciationDay 💣💥Trump Issues Full Pardons To Oregon Ranchers Forced Back Into Prison Under Anti-Terror Law- Most malicious case EVER! 👇👇👇 https://t.co/39jlVANFSC via @dailycaller

This is ABSOLUTELY the right thing to do!
HUGE victory here and absolutely no parsing from me.
Thank you Trump!https://t.co/ynmwJrpyKU