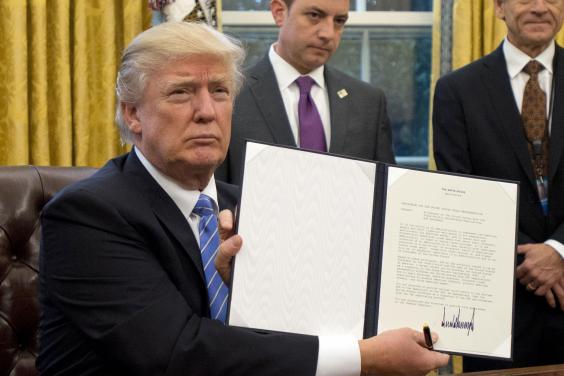 Trump did the right thing. America should not be funding international groups that perform abortions or groups that promote abortions.

Donald Trump has reinstated a ban on providing money to international groups that perform or “promote” abortions.

Mr Trump signed an executive order to reintroduce the regulation, known as the “Mexico City Policy”, after the ban was ended by Barack Obama in 2009.

The ban has been a political volleyball after it was instituted by Republican administrations following its start in 1984 under Ronald Reagan’s presidency, only to be rescinded by Democrat leaders.

The order prohibits federal money from being provided to international groups or charities that perform abortions or provide information on the option.

Mr Trump signed the order a day after the anniversary of the Supreme Court’s 1973 Roe vs. Wade decision that legalized abortion in the United States.

The date is traditionally when presidents take action on the policy.

Republican Michael Burgess said: “I applaud President Trump for taking this important action and look forward to continuing to work together in advancing pro-life policies and protecting taxpayer dollars.”

She said the return of the rule “ignores decades of research, instead favoring ideological politics over women and families’ futures.”

Ms Sheehan said she would introduce a bill to repeal the rule on Tuesday.

Mr Trump also signed executive orders for the United States to withdraw from the Trans-Pacific Partnership trade deal and a freeze on federal government hiring except the military.

The Clinton's Are Making A Plan For Their Comeback

Madonna: "Blowing Up White House" Comment Taken Out Of Context