Trump Responds To Biden’s “Take Him Behind The Gym” Remark 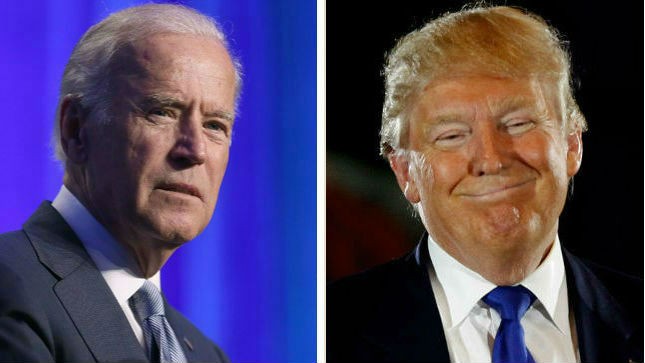 Donald Trump responded Tuesday to Vice President Biden’s remark that he would like to “take him behind the gym” if they were in high school, saying he would welcome such a confrontation.

“He wants to bring me to the back of the barn. Ohhhhhh,” Trump said with mock fear, botching Biden’s quote. “Some things in life you can really love doing.”

At a recent campaign stop for Hillary Clinton, Biden strongly criticized Trump’s recently revealed remarks on a 2005 hot microphone, in which he bragged about forcing himself on women sexually.

“What he said he did and does is a textbook definition of sexual assault,” said Biden.

The vice president said reporters routinely ask him whether he wishes he had the chance to debate Trump.

“No, I wish we were in high school. I could take him behind the gym. That’s what I wish,” said Biden.

“You know when he’s Mr. Tough Guy? When he’s standing behind a microphone by himself,” Trump said.

At his rally, Trump also followed up on muddled comments he made earlier in the day about the Affordable Care Act. Trump said a “small number” of employees at his Trump National Doral resort near Miami receive health insurance through the health-care reform law, also known as Obamacare.

“They are having tremendous difficulty,” Trump said, as he blasted the law.

Earlier in the day, Trump Doral general manager David Feder told reporters that “over 95 percent” of the resort’s employees receive health-care coverage through the company and that “very, very few” of them rely on plans offered through the federal health-care law.

Trump Responds To Biden’s “Take Him Behind The Gym” Remark