Great big BINGO for you Molon Labe. Of course, Donald Trump was right. Obama is a worthless lying scumbag. We knew WHAT he was back in 2008.

Back in March 2017 President Trump tweeted about Barack Obama’s illegal spying on the Trump campaign in 2016.

POTUS Trump tweeted this in March.

How low has President Obama gone to tapp my phones during the very sacred election process. This is Nixon/Watergate. Bad (or sick) guy!

Nearly a year later we know that the FBI was investigating the Trump Tower servers during the election.

Now this… Trump was right. Obama WAS spying on candidate Trump! 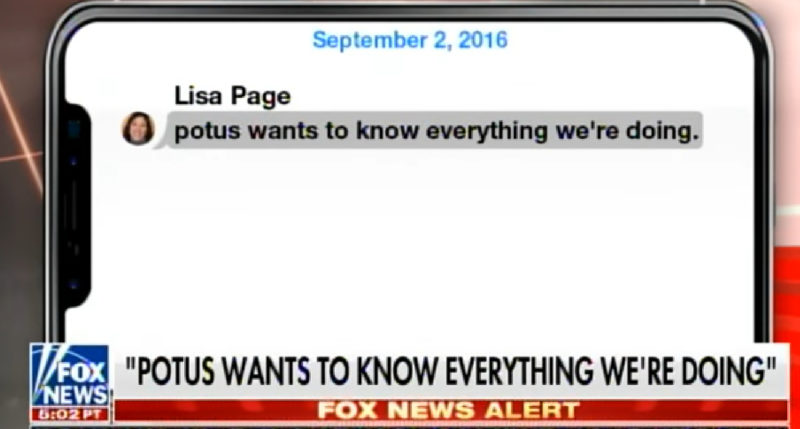 Wow – This is Huge – A text message reportedly from corrupt FBI lovers and former Mueller investigators implicates former President Barack Obama as being involved in the Obamagate scandal! Read more at TGP.

Newly revealed text messages between FBI paramours Peter Strzok and Lisa Page include an exchange about preparing talking points for then-FBI Director James Comey to give to President Obama, who wanted “to know everything we’re doing.”

The message, from Page to Strzok, was among thousands of texts between the lovers reviewed by Fox News. The pair both worked at one point for Special Counsel Robert Mueller’s probe of alleged collusion between the Trump campaign and Russia.

This didn’t age well!! Trump was right the entire time!!! Obama was the most corrupt spying lying Rogue illegal President in America’s history! They tried a coup, they tried to FRAME him all to cover up for their own crimes & LOSING the election. American’s proudly chose TRUMP! pic.twitter.com/8eAwyKRAdH

How low has President @BarackObama gone? THIS LOW… pic.twitter.com/FfKwWuaHdF

Watergate was small fry compared to this. If you have any day in this release the entire thing. Including fisa warrant

Looks like Obama and his KGB FBI, DOJ operatives worked overtime using the powerful tools of US intel to spy on u and team to bring u down, undermine our election, 4th Amendment rights, and our democratic principles as a country. #ReleaseTheMemo #NoJusticeNoPeace #FISAGate