Does “necessarily skyrocket” jog anyone’s memory? Obama told us that his war on fossil fuels was to help the environment and fight “global warming was all for us.”

But the real reason for choking off our energy supplies was to boost the price we pay for transportation, the price we pay to heat and cooling our homes. And that was just one more way that Obama tried to control every aspect of our daily lives. 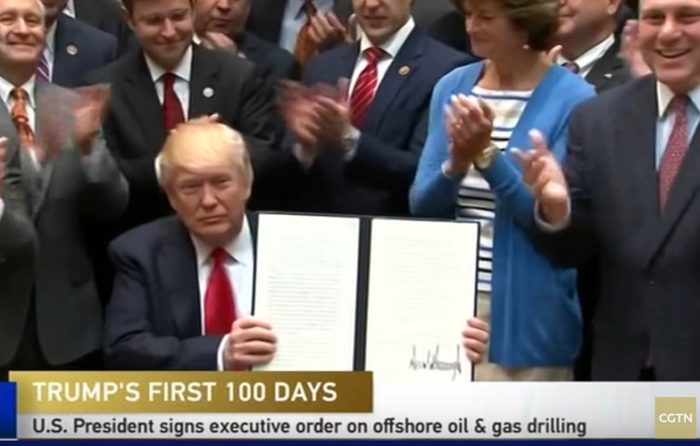 WZ: Production and revenues from federal onshore and offshore leases fell dramatically during Obama’s 8 year assault on the energy industry. Trump is putting an end to that war and opening up federal lands to drilling. Drill, baby, drill.

Washington Times: Reversing yet another of his predecessor’s actions on energy and the environment, President Trump on Friday signed an executive order that paves the way for a massive increase in offshore oil-and-gas drilling.

In brief remarks at the White House, Mr. Trump said the order — which is likely to result in new energy exploration in the Atlantic, Pacific and Arctic oceans, as well as in the Gulf of Mexico — will boost the nation’s economy and directly create jobs. The order undoes former President Obama’s ban on new offshore drilling leases in the Atlantic and Arctic, which was put in place during the final weeks of his term.

“We’re opening it up,” the president said. “Today we’re unleashing American energy and clearing the way for thousands and thousands of high-paying American energy jobs. Our country is blessed with incredible natural resources, including abundant offshore oil and natural gas reserves … This executive order starts the process of opening offshore areas to job-creating energy exploration. It reverses the previous administration’s Arctic leasing ban, so hear that — it reverses the previous administration’s Arctic leasing ban, and directs Secretary Zinke to allow responsible development of offshore areas that will bring revenue to our treasury and jobs to our workers.” More

Do You Want To See Where This Is Going If Not Stopped? Employees Chase Down & Assault Customer Without A Mask…
February 27th, 2021 Sons of Liberty Media