Goodell could have stopped this right after the first time Kaepernick pulled this stunt. Only now, when the revenue is dropping like a rock does he want to get serious. They are obviously feeling the pinch from their advertisers. Good. Now, will the pinch turn into a punch in the gut?

Is it just too little, too late? 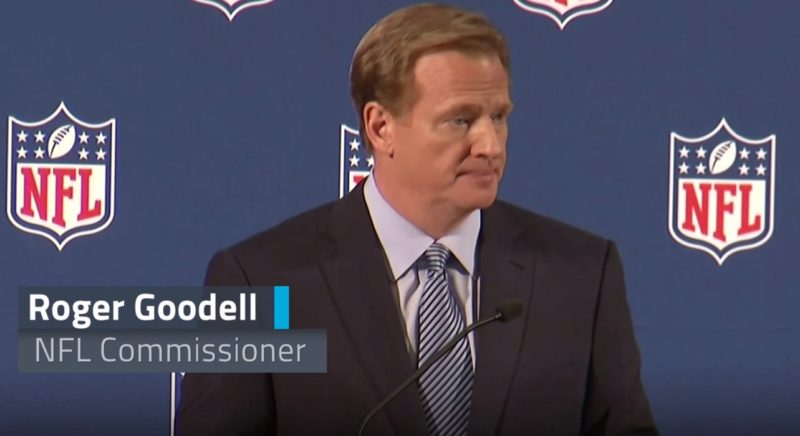 Newsweek: The NFL quietly changed its rules on players protesting the national anthem following a torrent of criticism from President Donald Trump, according to reports.

Trump slammed the organization last month as more and more players took a knee during the anthem prior to games. “NFL must respect this!” he tweeted on September 25, followed the next day by: “The NFL has all sorts of rules and regulations. The only way out for them is to set a rule that you can’t kneel during our National Anthem!”

On Sunday, as Cowboys GM Jerry Jones spoke to reporters, it emerged that he had spoken to Trump “about an NFL policy in game operations manual that dictates players stand for the national anthem.” […]

Crucially, it warns that failure to follow these rules “may result in discipline, such as fines, suspensions, and/or the forfeiture of draft choice(s) for violations.” This rule, however, seems to have been altered.

According to Deadspin, the 2014 edition of the game operations manual—officially named the Policy Manual for Member Clubs—is significantly different when it addresses punishment. It says: “Failure to be on the field by the start of the National anthem may result in disciplinary action from the League Office.”

The version currently being pushed out by the NFL differs in two ways: Firstly, there are increased penalties for not standing for the national anthem, but also the punishment does not have to come from the league office now.

ESPN: The NFL has developed a plan to “move past” its ongoing debate about player protests during the national anthem and could enact it next week, commissioner Roger Goodell wrote Tuesday in a letter to all 32 teams.

Goodell made clear in the letter, obtained by ESPN’s Adam Schefter, that he wants players to stand during the anthem. He did not provide specifics on how he intends to ensure it, but he wrote that it would “include such elements as an in-season platform to promote the work of our players on these core issues.”

The issue will be discussed, and likely acted upon, during the NFL’s regularly-scheduled fall meetings on Oct. 17-18. More

Peter Daou: If You Spread The Idea That Hillary Is A Horrible Monster, You Were A Russian Propagandist