Every time I think the liberals can’t sink any lower, they find a way. Muslim men “circumcise” little girls so they don’t become “whores” later in life.

Unlike male circumcision that has real medical benefits, female “circumcision” can seriously harm the health of women and girls. It can also cause long-term issues with sex, childbirth, and mental health. 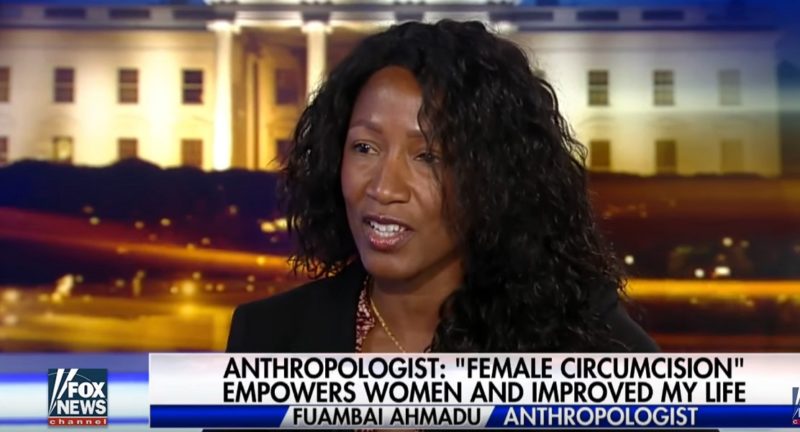 There are no health benefits to FGM and it can cause serious harm, including:

Is this what feminists want for American women: for their genitals to be mutilated as children so they can never enjoy their sexuality?

TGP: Anthropologist, Fuambai Ahmadu appeared on Tucker Carlson Wednesday evening to discuss ‘female circumcision’. Instead of denouncing the practice, she defended it and actually tried to redefine it.

Ahmadu:”I don’t identify with the term FGM with the term mutilation, I don’t know anybody in my family that does or my community. And from over 25 years of research I’ve done in the field, I would say the great majority of women who are affected by what I call female circumcision practices do not see themselves as mutilated.”

This woman went on to defend the doctor in Michigan who was arrested for performing genital mutilation procedures on young girls. Tucker Carlson brought up the point that little girls shouldn’t be subjected to such barbaric practices because they are too young to consent for something that leaves them with permanent damage.

How could anyone defend harming innocent girls like this? This woman is pure evil.

Lindsey Graham: If Anthony Weiner Got Classified Info, Someone Committed A Crime (Video)

If The The Riots Were A ‘Dangerous Insurrection Plot’ … Why Did This Guy Get Out Without Bail?
January 18th, 2021 Clash Daily

Were all the Founding Fathers really hypocrite white supremacists?
January 17th, 2021 The Real Side With Joe Messina

The New Prophets – Tell the World to Take It or Leave It
January 17th, 2021 TCP News