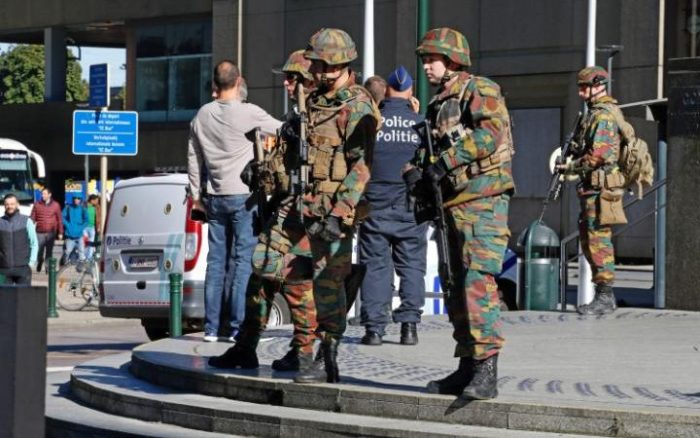 Luckily the Brussels officers who were stabbed, were not seriously injured. Another officer spotted the suspect and was able to arrest him.

A knife-wielding assailant stabbed two policemen in a Brussels district known as a hotbed of jihadism in what prosecutors are treating as a suspected terrorist attack.

The assault, which ended in the suspect being shot in the leg, took place as one of the Belgian capital’s main railway stations was briefly closed due to a bomb scare.

The assailant, named by the Brussel prosecutor only as Hicham D, a 43-year old Belgian national, lunged for the officers in a busy main road in Schaerbeek – the Brussels neighbourhood where the terrorists behind the airport and metro attacks of March 22 had set up their bomb-making factory.

Several terror suspects linked to the Brussels blasts, in which 32 people were killed and around 300 injured, were based there, as were members of the group behind the attacks in Paris last November, in which 130 died.

The inquiry has been handed over to Brussels’ federal prosecutor, which handles all terror cases.

“The case has been turned into a federal one because we have every reason to believe that this was a terrorist attack”, said Erik Van der Sept, spokesman for the federal prosecutor.

“We cannot say more for now as we are gathering information.”

He said the man had given no indication of his motives during or after the stabbing.

According to Belgian media, the knife attack took place during an identity check.

The prosecutor’s office confirmed that the man stabbed one of the police officers in the stomach and the other in the neck. Neither was seriously hurt.

The suspect then tried to flee the scene but was spotted by another police patrol who opened fire to “neutralise” the man who had broken his nose in the violent struggle.

“He was wounded by a gun shot to the leg,” said the prosecutor’s office. More