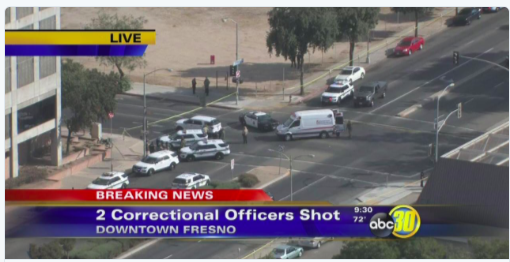 They have not released a motive for the shooting yet but the gun grabbers will be all over this before they even release the whole story.

Authorities say two unarmed officers were seriously injured after being shot by a visitor in the lobby of the main Fresno County jail.

Fresno County Sheriff Margaret Mims said a man with a long criminal history entered the lobby Saturday morning and tried to cut ahead in the visitor line to see an inmate.

When confronted by a correctional officer, suspect Thong Vang pulled out a gun and started shooting, Mims said.

Mims said two officers were shot in the head or neck area.

Officer Toamalama Scanlan was hospitalized in critical condition and Officer Juanita Davila was in critical but stable condition.

Mims said a lieutenant returned fire and Vang surrendered. Mims said the suspect was injured but it was not immediately clear whether he had been shot.