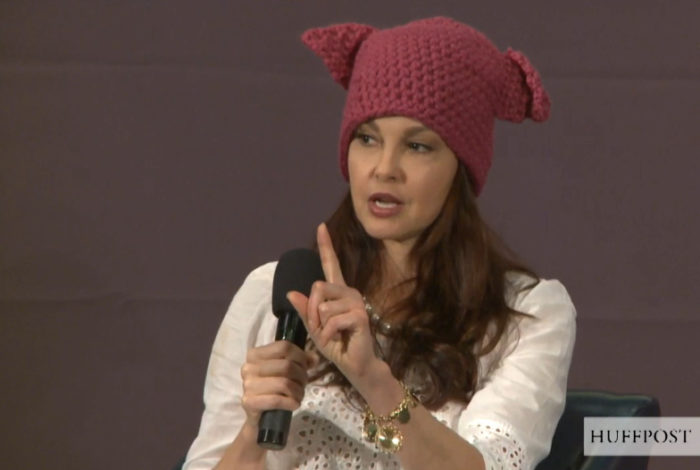 It’s the height of insanity and a complete insult to every woman who has been sexually abused or has endured the brutality of rape to be compared with a boastful, what was thought to be private, conversation between two men.

If she really was concerned about rapists, she would have been attacking an actual known rapists, you know like Bill Clinton!

Actress and left-wing activist Ashley Judd says the “tragedy” of Donald Trump’s election victory is far worse than an experience from her childhood in which she was raped.

“It remains for me the worst thing that has ever happened to me in my lifetime,” Judd said of Trump’s successful election. “Raped as a child – bad. Re-raped by a political system that ordains a clown – really bad.”

The Divergent star made the claim in a Huffington Post video titled, “Ashley Judd describes being triggered by Trump.”

Sporting a so-called “Pussy Hat” popularized by feminist activists, Judd said the same male family member who failed to protect her from being sexually assaulted as a child betrayed her again by voting for Trump.

“And the fact that there were adult men in my family – who failed to protect me as a child – voted for him, was really re-traumatizing in saying, ‘You’re gonna put me out there again. And the idea that you would protect me has evaporated.’ And it was incredibly painful. Incredibly painful,” she said.

“Immediately I began to weep, because it’s not ok. It’s not ok,” Judd added. “For me it’s not about the wall, it not about any of that stuff. It’s about, you voted for a pussy grabber. You voted for someone who calls his wife a piece of ass, whose daughter is his favorite sex symbol. It really boils down to me to the sexual assault and the misogyny piece.” More