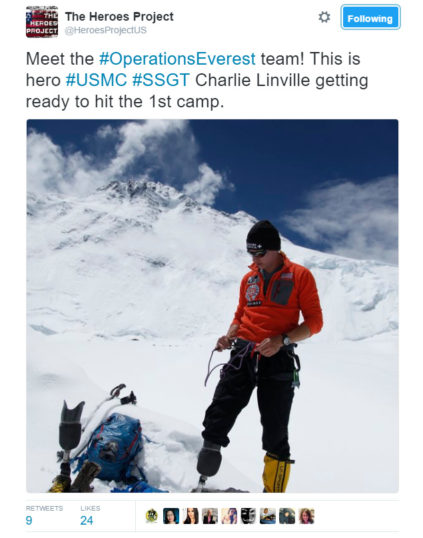 Semper Fi! Congratulations to an American Hero. This is an enormous accomplishment. Well done.

A U.S. Marine Corps veteran made history Thursday as the first ever combat-wounded amputee to reach the summit of Mount Everest.

Staff Sgt. Charlie Linville, 30, climbed the 29,029-foot summit of the highest mountain on earth with a prosthetic leg after being involved in a blast in Afghanistan in 2011 that left him with serious injuries to his right food and hand.

Linville, a father of two from Boise, Idaho, decided to have his right leg amputated below the knee after rehabilitation and reconstructive surgeries, according to The Heroes Project , an organization that leads mountaineering expeditions with gravely wounded veterans and active service members to help them rediscover their strength and pride. More

In addition to losing his leg, 30-year-old Linville suffered a severe brain injury when a bomb that he was defusing went off in Afghanistan in 2011.

He reached the 29,000-foot summit on his third attempt.

“I was looking for something to completely change myself… and really get rid of the demons that were created from war,” the Idaho native told CBS in April before leaving on his journey. More