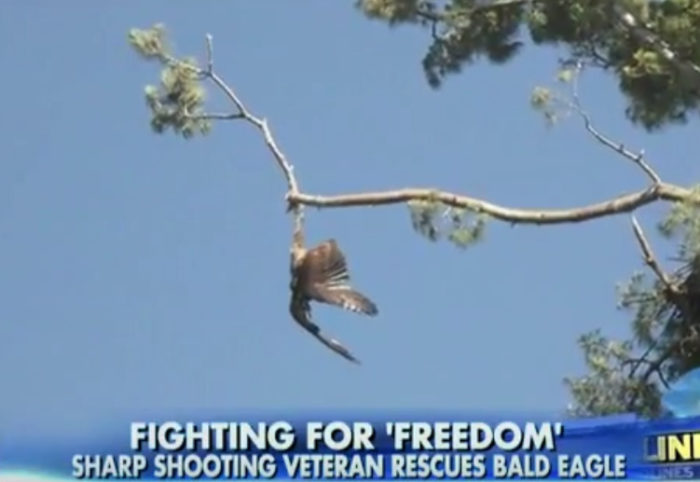 Hopefully they can quickly release the eagle back to the wild where it belongs. It’s always uplifting to see these magnificent birds soaring high above.

A U.S. Army veteran used his sharp-shooting military training to rescue a bald eagle who became entangled in a rope and was hanging upside down from a tree, 70 feet off the ground.

Last Thursday, Jason Galvin used a .22-caliber rifle with a scope to fire 150 shots at the distant rope that was tangled around the eagle’s leg. The bird was hanging upside down in a tree near Galvin’s Rush City, Minnesota cabin, according to his wife.

Galvin’s wife, Jackie, wrote on Facebook Friday that her husband was nervous about shooting near the eagle but the couple felt they had no choice after officials said the eagle had been stuck for days and there was “nothing they could do.”

“I told Jason he had to shoot it free! He was nervous as he didn’t want to get in trouble for shooting at an eagle but I know with his sharp shooter skills that if anyone would save this eagle it was him!,” Jackie wrote in the post.

She described the rescue effort taking nearly 90 minutes with a borrowed gun, in difficult conditions. “A neighbor at the cabin drove by and borrowed Jason his .22 as it had a better scope than Jason’s,” she wrote. “It was windy and he only had about 4″ of rope to shoot without hitting the eagle.” More